As COVID-19 raised its ugly head in the rural areas of Southwest borderlands this winter, I recalled the conditions among farmworkers described by Jeff Banister, now director of the Southwest Center at the University of Arizona, after he had spent days out in the heat with migratory farmworkers at the border between the U.S. and Mexico.

“By day, field hands toiled in the region’s extreme humidity and heat. At night, they slept under roofs of cardboard. Blankets covered bare ground and bathroom facilities were makeshift pit latrines,” wrote Banister.

The field conditions he described now may as well be considered the perfect “petri dishes” for the colonization and spread of COVID-19. 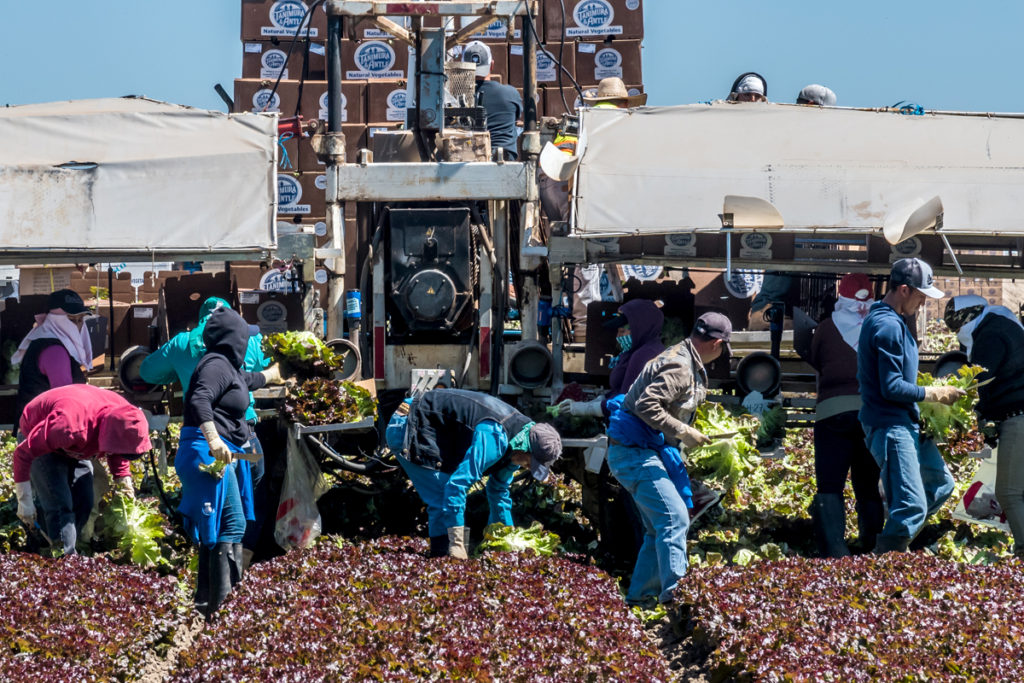 Near the border crossing of San Luis del Rio Colorado, Sonora, I have personally witnessed as many as 50 busloads of Mexican day laborers heading for the searing heat of lettuce and onion fields in Yuma County, Arizona. Many of the 10,000 Mexican citizens who pass into the U.S. there to harvest crops are young women and girls who speak the native language of the Trique, getting by in the U.S. with only a rudimentary knowledge of agrarian Spanish or English.

It is unlikely that these Trique women—who tend to speak just enough Spanish to take orders from Mexican crew bosses, but speak Oto-Manguean languages at home—are being given clear, audible, culturally appropriate instructions about the spacing and health precautions that might help them avoid being infected with COVID-19 while they are in the fields, or back at home.

Tragically, the Latinx and Native Americans farmworkers, cowboys, and sheep herders who harvest food and herd animals in the desert Southwest have been harder hit by COVID-19 than any group in the Sunbelt other than nursing home elders. As of today, the Navajo Nation has surpassed New York and New Jersey for the highest per-capita coronavirus infection rate in the U.S. 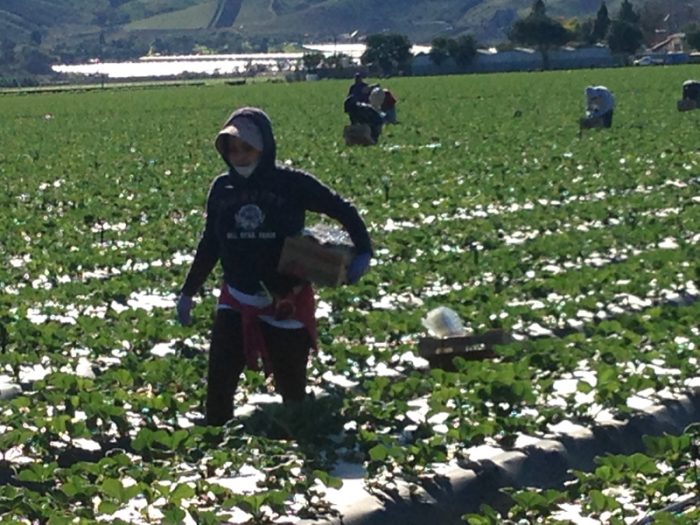 Most American consumers may not realize that much of the leafy greens, durum wheat, onions, and asparagus that they eat in winter and spring come from 100 miles of either side of the U.S.–Mexican border. In particular, Yuma County, Arizona is responsible for 90 percent of all leafy vegetables grown and harvested in the U.S. between November and March.

It was during those months that the first cases of COVID-19 came into California, and spread all the way across the borderlands. It is also when the pandemic time-bomb exploded in the agricultural communities just outside Yuma. Ironically, this is the very area where Chicano farmworker activist and co-founder of the United Farmworkers, Cesar Chavez, was born and buried.

Of the 285 coronavirus cases in Yuma County recorded by May 14, 143 of them had occurred on the outskirts of Yuma itself, especially in and around the farm labor camps of San Luis, Arizona. But no one is collecting data on occupation, so it’s not clear how many of those cases are among farmworkers.

But that viral time bomb has also sent its shrapnel south of the border, where more than 80 cases of COVID-19 were documented in San Luis del Rio Colorado, Sonora—another community populated by farmworkers—by May 10. There are more cases in the San Luis shanty towns than there are in all of Metro Hermosillo, the capital of Sonora that has four times the population.

It is a surreal site to see hundreds, if not thousands, of young women—in many cases, girls—arriving at the field’s edge, covered head to toe, wearing their own bandanas and scarves—and walking from buses into the glare of the sun to pick crops. Sometimes 50 of these Indigenous and Latinx farmworkers step out of a single bus, then huddle to receive instructions from the bilingual crew boss hired by a labor broker.

The farmer may never learn the names, nor see the full faces of the women who come to work in their fields. Yet fully half of Yuma farmers use “Mexican labor” that come up from the other side of the border, as if it is merely another commodity cost for doing business, rather than human beings fully shrouded to protect themselves from intense heat and light that few Americans have endured.

There has been much coverage of the impact of COVID-19 on the Navajo Nation, but there are three Indian reservations in the agricultural counties along the Arizona-Sonora border, and the two reservations to the north are also being disproportionately affected by the coronavirus.

Why? For starters, like border towns, reservations in the Colorado River watershed also suffer rates of poverty twice that of the rest of America. They’re also home to some of the most inadequate healthcare facilities in the entire U.S.

I was shocked to learn that Navajo Nation farming, herding, and ranching families are being hit by COVID-19 at rates double their contribution to the overall population in the Southwest. Rural Navajo communities form one of the five worst COVID-19 hotspots in the entire country, with at least 100 deaths and over 3,100 other known cases.

With nearly 14,500 farms, the Navajo Nation—by far the largest reservation in the U.S.—has more farmers, herders, and ranchers than any other group of Native Americans in Arizona.

“What also sets Navajo Nation farming apart from other operations in the United States is the predominance of female operators,” Julie Murphee, communications director of the Arizona Farm Bureau, told me. “Just under 50 percent of all Navajo Nation farms had a principal operator who was female,” compared to 14 percent of farms on the national level.

But now the spread of COVID-19 is threatening a growing number of Navajo women who are involved this season in sowing seeds, lambing, and herding as well as taking care of their home-bound elders and infants. For the most part, they must rely on the widely-scattered Indian Health Services clinics when their family members’ temperatures rise and their breathing becomes difficult.

The Navajo health officials I know have confided that they are deeply challenged by logistics of helping families living in remote sites. The off-reservation hospital that is closest to most Navajo communities (in Gallup, New Mexico) is in such disarray that most of its staff signed a “no confidence” resolution protesting the dismal management capacity of their administrators. Incredibly, Doctors Without Borders had to fly physicians into Navajo Country who are usually deployed beyond the borders of the U.S.

“It’s very saddening to receive the new numbers each day,” said Navajo Nation President Jonathan Nez at a recent press conference. “There are a lot of grieving families, and [yet] there is a lot of work yet to be done.… The projections are alarming.” 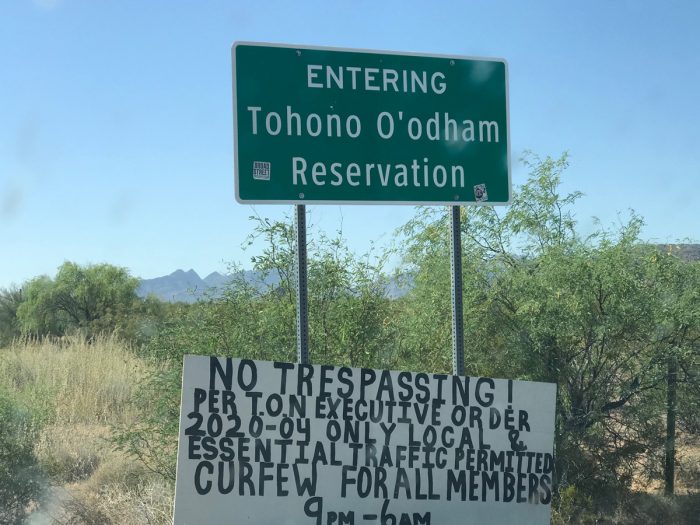 As my colleague Maribel Alvarez, now associate dean of community engagement at the University of Arizona, has pointed out, “It’s ironic that for many decades, Americans flocked to the border towns to get a taste of the sumptuous border cuisines that are now celebrated worldwide [while] many of the families living near the border on both sides of the line—especially migrant and seasonal farmworkers—suffer from some of the highest rates of hunger, food insecurity, and disease out of any group of people living in North America.”

We know that people of color are particularly vulnerable to COVID-19 in the Southwest. Native Americans are experiencing rates at more than twice than what would be predicted in their population size in Arizona alone. But the coronavirus toll on the many Indigenous families who serve as workers essential to prop up our ailing food system has been largely overlooked or dismissed.

My Native American colleagues concede that structural racism is part of the problem. Although the U.S. census confirms that Native American farmers and herders—along with Latinx farmworkers—are the dominant demographic groups, there has never been an Indigenous or Latinx farmworker or herder on the governing board of the Arizona Department of Agriculture in the 108 years since statehood.

In addition to feeling as vulnerable to the COVID-19 virus as other marginalized Americans, these Indigenous people also tell me that federal contractors helping build Trump’s wall still cross their borders and stop at their grocery stores despite tribal ordinances to prevent them from doing so.

The National Congress of American Indians and most affected tribes have passed resolutions asking Homeland Security to halt border wall construction, but these pleas have been ignored even as the coronavirus crisis surges around them. Thousands of construction workers from other states are now congregating in border towns adjacent to reservations to use as staging areas.

As Lorraine Eiler, an 83-year-old retired nurse of the Hia c-ed O’odham community in Ajo, Arizona, told me last week, she and her relations have “deep concern and opposition to further extension of the border wall” that is cutting across their binational homelands. At the same time, she conceded that her community has always had a great fear that border patrolmen will come to “deport” their family members and neighbors just because of their skin color and accent—no matter where border they were born.

Cesar Chavez would be rolling over in his grave.