When Gary Nabhan was growing up in the Indiana Dunes, Indiana, he remembered being sleepy in the middle of his class one day. Looking out the window, he studied the leaves of a tree nearby.

Nabhan, who would later find out he is color blind, thought the leaves had odd colors. And as this crossed his mind, the leaves — which turned out to be monarch butterflies — flew away. Nabhan’s lifelong fascination with pollinators had just begun.

Pollinator animal species such as bees, bats and monarch butterflies are essential to biodiversity. Patagonia, in southeastern Arizona, is an important corridor for monarchs migrating from Mexico as they fertilize native plants, transporting pollen from one flower to another when they land for recovery. Without pollinators, plants in North and South America wouldn’t repopulate as successfully, according to Nabhan’s research.

But monarch migration across borders doesn’t just affect plants, it also touches the lives of humans.

Nabhan, a 68 year-old research scientist at the University of Arizona, lives in Patagonia, which has a small butterfly garden on the edge of the town park. The miniature garden has a small sidewalk with educational plaques and colorful ceramic sculptures. Rainbow butterfly shapes line the benches inside the fenced area. A sign reading “Monarch Qaystation” marks the beginning of a sidewalk flanking the park’s perimeter.

These signs record locations with native milkweeds or plants that support monarch populations on their migratory journey.

As a researcher focusing on food and water security in the borderlands, Nabhan has a long history studying pollinator species. In the 1990s, Nabhan worked on the Forgotten Pollinators Campaign at the Arizona-Sonora Desert Museum to promote awareness of bee, butterfly, bat, dove and hummingbird relationships to wild plant and crop health. “This is what we call one of the most important nectar corridors in continental North America,” he said about Southern Arizona. 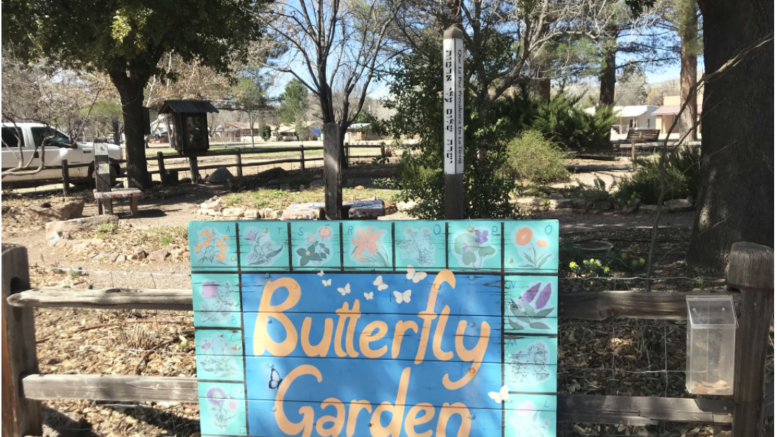 The butterfly garden in Patagonia, which hosts artwork and mosaics dedicated
to butterflies. (Photo by Alexandra Pere/El Inde).

Nabhan’s research into pollinator migration shows there is a sequence of flowers from central Mexico to California essential to monarchs. As recently as 20 years ago, most assumed monarchs didn’t pass through Arizona and went directly to California from Mexico.

However, nonprofit organizations like the Southwest Monarch Study collected data by tagging monarchs in Arizona, gaining substantial evidence that the state was a refuge for the species.

Gail Morris, the coordinator for the Southwest Monarch Study, said monarchs migrate through Patagonia in late March, when temperatures are mild and flowers begin blooming. With spring in the air, the monarchs head north to find refuge from the desert’s blistering heat. And while the Southwest Monarch Study illuminated Arizona’s importance for monarch populations, recent studies have recorded major decreases in western monarch populations.

Pesticides, climate change and habitat loss are to blame. A study published in the Insect Conservation and Diversity Journal says current butterfly populations have difficulty finding their favorite plant, milkweed, due to modern agricultural practices. Glyphosate, an herbicide often used in Roundup for GMO crops in Iowa agriculture, kills milkweed, which is an essential food source for monarch caterpillars. Herbicides contain poisonous properties, which, combined with monarch body chemistry, make them taste bitter to predators.

Climate change also has a hand in killing milkweed populations. With temperatures rising in the Southwest, moisture is squeezed from the landscape. Droughts are prolonged and inhibit massive blooms of milkweed, Nabhan said. Arizona’s native milkweeds aren’t being thinned by pesticides — they are weakened by climate change.

The third obstacle for the monarchs lies across the border in Mexico. The lush forests in Mexico’s Monarch Butterfly Biosphere Reserve are blanketed every winter with thousands of orange and black wings. A UNESCO World heritage site, this reserve is a major attraction for ecotourism in Michoacán state, with a habitat that provides ample nectar sources and water for the monarchs. But some would prefer to use this land in other ways. Conservationists, farmers, and loggers clash on the appropriate use of the reserve’s natural resources.

Many of the illegal loggers are connected to cartel groups. In early February, news of the murders of two butterfly conservationists went viral. Their bodies were found in suspicious circumstances but nobody has been found guilty of the crimes. After the media reported heavily on these two conservationists, employees at the Reserve became worried about the effect on tourism, said biologist Valeria Canedo.

Canedo is a biologist in Hermosillo, Sonora. Over a WhatsApp call, Canedo displayed childlike excitement whenever she talked about butterfly conservation. She studied biology at the Universidad de Sonora and has friends working in the Reserve, but she worries efforts there will weaken if tourists don’t visit due to intense media coverage on the murders. This would be a major setback for conservationists working to convince the community that ecotourism is a viable economic option to logging and avocado farming.

Canedo excitedly described the first time she visited the Reserve: “It’s something magical. You can talk to the butterflies while they land on your head.”

Back in 2016, Canedo started the project Alianza Mariposa Monarca with Sky Island Alliance, a nonprofit conservation organization based in Tucson. Her project involved fellow university students with the collective goal of educating the community about the monarch population in Sonora. Canedo’s group educated younger students and citizens on the importance of migratory species, and would later win a scholarship from the nonprofits Conservation International and Nabhan’s Make Way for Monarchs.

Canedo could finally collect data on the monarchs in Sonora through monitoring.

“It was one of the happiest days of my life, I was out sick and I couldn’t go to a field trip with my school so I went to the store and saw five or six butterflies eating on nectar,” she said. “I told someone to get a ladder so I could take a picture to show my friends, ‘They’re here, I’m not crazy.’”

Francesca Claverie, the Native Plant Nursery Manager for Borderlands Restoration Network in Patagonia, met Canedo when she came to visit the nursery. Claverie gave her a tour of the warm greenhouses with rows of seedlings native to specific biomes. Canedo was immediately interested and invited Claverie to present at her university. They began a relationship across the border, sharing research and grant information for conservation work.

Meanwhile, back in Patagonia’s small butterfly garden, you can watch milkweed flowers bloom from spring to late summer. The white Arizona milkweed flowers are a refuge for black-and-orange winged hitchhikers, catching a ride on weather patterns from Mexico. Patagonia’s unique location gives conservationists an opportunity to work across the border and collaborate on borderlands conservation.

“We have to solve these problems together and one country can’t do it on their own,” said Nabhan.

This story was first posted on the Arizona Sonora News Service

Corona de Cristo in the Era of Corona Virus