Farmers and ranchers hold the key to carbon storage.

As we celebrate Earth Day’s 50th anniversary, the environmental movement finds itself at a critical point in time to reflect upon its record. When have we, as environmentalists, fostered collaboration with the food and farming sectors, and when have we pushed those potential partners away and generated conflict in our rural communities?

When I worked at the headquarters of the very first Earth Day in 1970, it operated as a network of grassroots environmental organizers, and there was little focus on the overall environmental benefits or consequences of farming and ranching. 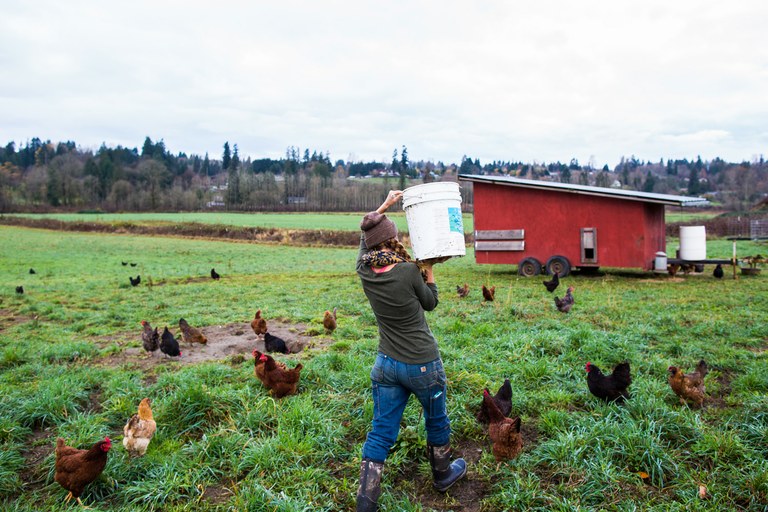 Micha Ide of Bright Ide Acres farm, Washington, practices rotational grazing on her farm.
Animals are moved frequently around the pasture to increase soil fertility and enhance
the sustainability of the farm.

Our little newsletter, Environmental Action, covered how toxins were appearing on the lands and in our food, even though terms like “environmental justice” and “food justice” had yet to be coined. Nevertheless, very little of our “environmental action” was directed to ensuring the health of the soil, the diversity of the crops planted on it, the preservation of food-producing or the viability of livelihoods for farmers and ranchers.

Francis Moore Lappé’s Diet for a Small Planet had recently hit the stands, and all the talk was about abandoning meat to eat low on the food chain. For a while, many of us tried to boil up soybeans or pintos to plop down on a heap of brown rice or corn mush. To my amusement, the results did not always sit well with our GI tracts or our taste buds.

As Wendell Berry — farmer, poet and natural historian — has pointed out in his many books, including The Unsettling of America, few environmentalists had any notion of how important it might be to support small-scale, diversified farming, with or without livestock. There was little dialogue about how to help reduce the kinds of collateral damage that food production caused to the environment and to the farm workforce. Berry wrote: “At the time of the first Earth Day, conservation was dealing with wilderness preservation and environmental emergencies,” not regenerative agriculture.

In some ways, Berry believes, not much has changed: “Now it is dealing with wilderness preservation, environmental emergencies, saving the world by replacing too much fossil fuel energy with too much wind and solar energy, and by eating fake meat!”

Today, food-producing activities extend to nearly 40% of the planet’s land surface, not counting the aqua-cultural production that spans a large swath of the world’s estuaries, lagoons and wetlands as well.

So why are farmers and ranchers increasingly seen as adversaries — not allies — to environmentalists? Perhaps it is because of the powerful influence that industrial food production, processing and distribution have on accelerating climate change, creating hypoxic dead zones in the oceans, and diminishing the diversity of microbes, plants and wildlife in our landscapes.

But what has escaped the logic chain of many environmental activists is this: More than any other human activity, small- and medium-scale food production has the capacity to shift from being a major emitter of carbon to becoming a major absorber and storehouse of it.

At least a half-dozen global surveys — and hundreds of on-farm projects — demonstrate that the widespread adoption of regenerative agriculture can reverse food production’s contribution to global warming. It can do so by 2050, according to a University of Virginia study released this last year in Nature Climate Change.

But even climate-friendly farming will not bear fruit unless environmentalists become allies to the farmers and ranchers who are trying to produce food in ways that heal both the land and the rural communities that depend upon it. As Mary Berry — Berry’s daughter and the executive director of the Berry Center — recently warned, “Since the first Earth Day, we haven’t made any progress in linking the threats to environmental health with the health of working landscapes. How can farmers afford to farm well, and how do we become a culture that will support good farming?”

When ranchers, farmers and environmentalists choose to bury the hatchet and work on the collaborative conservation of working landscapes in Western states, it is a game-changer.

Just seven such collaborative efforts have brought more than 3.8 million acres into co-management and restoration. When the Diablo Trust ranching collaborative invited the Arizona Wildlife Federation, a nonprofit focused on conservation, to see the work they were doing for pronghorn habitat enhancement, conflicts between the two groups subsided, and they began working together.

Collaborations like these have built bridges between more than 250 federal, state, county, local, nonprofit and for-profit entities in counties where divisiveness and litigation once reigned. Would you rather feed the bank accounts of litigious lawyers, or feed the soil, our rural communities and the landscapes that nurture us all?

As Berry prophesized several decades ago, “The most tragic conflict in the history of conservation is that between the conservationists and the farmers and ranchers.

“It is tragic because it is unnecessary.”

Gary Paul Nabhan — the sleepy-headed dropout who dozed on mailbags at Earth Day headquarters in 1970 — now works as an agro-ecologist, orchard-keeper, nature writer and Ecumenical Franciscan brother. His latest book is Food from the Radical Center: Healing Our Lands and Communities from Island Press. Follow him on www.garynabhan.com and www.healingtheborderdisorder.org .

This article was first published at High Country News.

Gary Paul Nabhan, recently interviewed by a clod of dirt

Dirt: So you occasionally write about us? Gary: Well yes, on occasion. Why? Dirt: What do you think entitles you…