As some of you can guess, I am the last person you’d want to assign to do an obituary of someone you love, so let someone else do that for Jerri & let me just say what she meant to me, many of you & what she exemplified of American life over the last century, for she was as emblematic of her times as Forrest Gump, Shirley Temple, Lucille Ball or Beyonce have been of theirs.

If you didn’t know, my mother passed away quietly and peacefully around 5:00 am on Presi-dense Day, after an extended illness in the Sun City/Peoria area of Metro Phoenix. She ran out of gas about a week ago, but her vehicle only came to a halt Monday, just before the sun rose over the Valley of the Sun. Born March 27th, 1927, she flew away on February 17th 2020, almost making it to age 94. 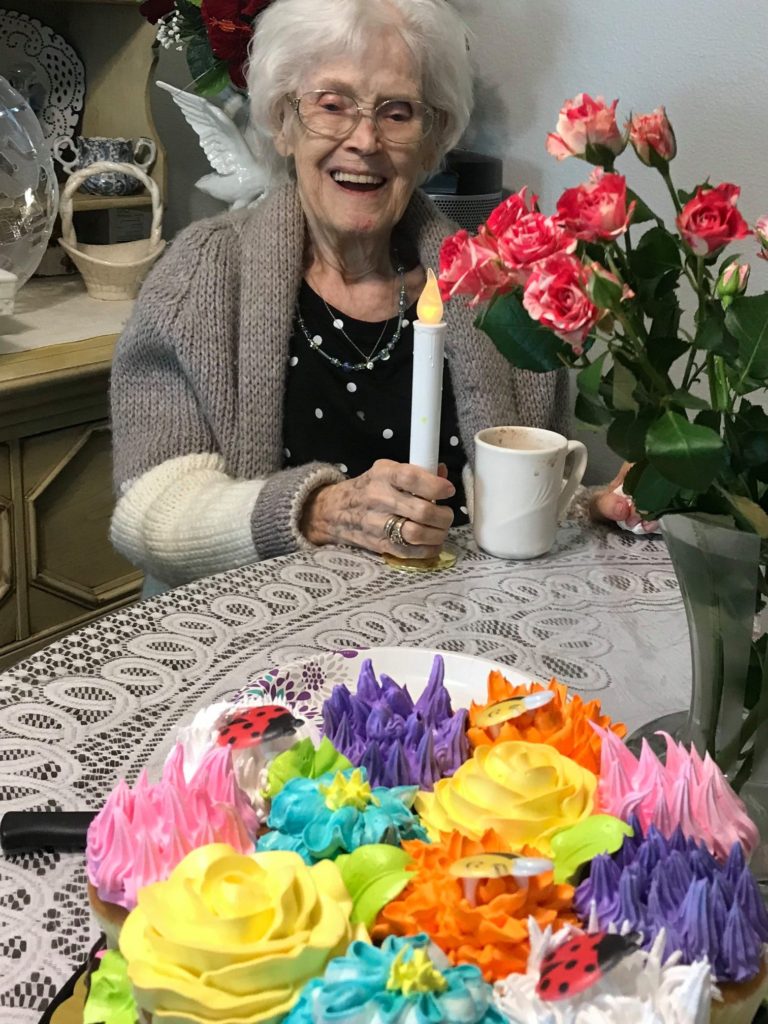 Before I throw a fishing net into the pond of her life and bring up a few historical facts that may or may not matter at all to anyone, let me just say a few simple things about her. She could converse with anyone, of any age, culture, race or creed, and make them feel at home. She could fix herself up to look not just dignified, but comfortable and pleasing under any circumstances, from card games and cocktail parties to (rare) campouts; in fact, just last week she put her hair into curlers by herself, more than 30,000 days after she and three of her sisters accomplished that feminine ritual for the first time in their lives.

Jerri was adaptable as Silly Putty or Gumby, growing up in a poor Irish Catholic family in the Midwest, then marrying into clan of wild Lebanese immigrants in the Indian sand dunes, then coming out West to wear pink cowboy hats like she was the older sister of Thelma and Louise. She had pride in every member of her family and could recite a litany of accomplishments –big or small- for each of them as if they had all become Astronauts or Beyonces. And she was as allegiant to her pals and gals as they were to her, with some of her friendships spanning more than fifty years.

But what strikes me the most is how her life echoed and was shaped by major events of the last century. Although born in rural Pennsylvania to Clare Alice Goodwin, a farm girl, and Bernard James Goodwin, an engineer and blacksmith—they moved to Gary Indiana by 1930 to take advantage of jobs in what was then called the City of the Century. She was part of the Great Migration to the Rust Belt.  But then the Great Depression threw her father out of work, and made it difficult for Bernard and Clare to feed the 14 mouths in their house, so they offered Wanda Mary offered her up as a “foster child” to friends with better means who lived just ten miles away. Debilitated by rheumatic fever as a child, she grew up under the love and care of two families—not just one—and freely moved back and forth between them. By the time she graduated from Horace Mann High School in Gary in 1945-close to the end of World War II—she was back home with the Goodwins, but never stopped showing her gratitude to the Dondanvilles who “adopted her” for the rest of her life.

When the GIs came back from World War II, it was courtship time, so she went out dancing to tunes from the Glenn Miller Orchestra and Frank Sinatra. On July 26, 1947, she married the brother of her close friend Lucille Clifton, an olive-skinned Lebanese-American named Ted Nabhan. When her father Bernard would not walk down his daughter  the aisle to marry a dark-skinned immigrant, they married anyway and moved into Ted’s family neighborhood in Miller Beach east of Gary. There, amidst the Indiana Dunes, she was taught to cook Middle Eastern foods by her father-in-law Benny the entire first week after the wedding (some honeymoon!). Five sisters-in-law lived all within a four-mile radius, so she received plenty of mentoring from other strong women. She had attended business school to learn stenography, book-keeping and other skills, but immediately got pregnant, and gave birth to her first son Norman in August of 1948. She became a full-time mother for a while, having two more sons over the next seven years. Arthur Godfrey and the Andrews Sisters were always on the RCA Victor radio, but sounds of ouds and Arabic dancing took over at family parties that were filled with grape leaves, pita bread, lamb shish kabobs and olives. She lived and ate double life, Drewry’s Beer and Oscar Meyer wieners at day, arak and stuffed zucchinis by night.

When her three boys reached the age where she could just let them wander the Dunes barefoot all summer, she went back to work for her friends Don and Mitzi’s local paper, the Miller Vanguard.  They were based just two blocks away from the Miller Lagoon, in the very neighborhood where National Book Award novelist Nelson Algren entertained the likes of Studs Terkel, Carl Sandburg and Simone Beauvoir, and other left-leaning intellectuals who hid in the Dunes during the McCarthy era. (She remembered seeing and  meeting these celebs, but would not claim them as friends.) The Vanguard paper prided itself on telling the stories of local eccentrics—the last subsistence fishermen on the lake, Diana of the Dunes, and other hermits. She loved the design work on lay-outs, but handled ads and distribution as well. By the time the 50s ended and the Kennedy era began, she turned to helping her husband Ted with elections as a city councilman, presidential delegate and American Legion state officer. They helped host the Gary-born astronaut Frank Borman on his return to his hometown, and went to the US Capitol when Ted testified in Congress about the alewife fish die-offs on the Lake Michigan beaches. More time dressing up, less time as a homemaker.

But after the assassinations of the Kennedys and Kings, Viet Nam war and civil rights protests, things fell apart. Dozens of blocks of Gary were burnt to the ground the day after MLK was killed. Our family escaped Miller after bullet shots sprayed doors in our neighborhood. My father was defeated in his re-election attempt as councilman, and moved us outside the city. Under stresses such as this, my parents broke up, and after a few years, Jerri went westward, where she eventually remarried, to a former cowboy and builder, Charles Buxton.  Together in Glendale Arizona, she set up to build the largest collection of time-saving electric appliances the world has ever known—including an electronic, automatic “sun tea” maker. I wish the Smithsonian would come and get these time pieces for its history museum.

Over sixty now, she was still fashionable. Her music tastes had changed from Connie Francis and Rosemary Clooney to Anne Murray and Glen Campbell, but Tony Bennett and Frank Sinatra remained in her pantheon all the way through. She loved having grandchildren around, and had a weak spot for buying gadgets off television ads. To her last year here on earth, she still made baklava and pineapple up-side cake from scratch, while her hair styles and hair colors continued to change with the seasons. She was known to ride a camel and a horse across desert sands, but preferred to ride high heels on sidewalks of cities. To each her own. Whatever she did, she did with class and a smile. And this is where I stop…with that glowing smile and eyes of merriment. Jerriment. We will miss her.

In the small Comcaac village of Punta Chueca, on the Sonoran coast of the Gulf of California, a group of women gathered…

Agriculture has been a major part of the state’s economy for a very long time, but droughts and heat waves…