When 340 protesters from many cultures showed up at Organ Pipe Cactus Monument on the Arizona-Mexico border this past November to express their heartbreak over the damage done by construction of a wall, law enforcement officers appeared to be baffled by their concerns. Officials from the Army Corps of Engineers and Homeland Security were surprised that all of the signs and chants were not targeted at the wall itself.

Sure, some of the youth present were in animal costumes to demonstrate how the 30-foot tall barrier would impede wildlife migrations, but many of the signs and speeches were focused as much on protecting sacred lands and sacred waters as they were on halting border wall construction. Indigenous speakers from the Tohono O’odham and Hia-ced O’odham communities lamented the harm being done to sacred springs and to the consequences of water loss to their ceremonial plants, some of which only of grow around oasis-like springs and seeps. These tribes consider the saguaro cactus to be sentient beings or ancestors, while other wetland plants are used in a sacramental manner during religious rites that have been practiced at the oasis for centuries. 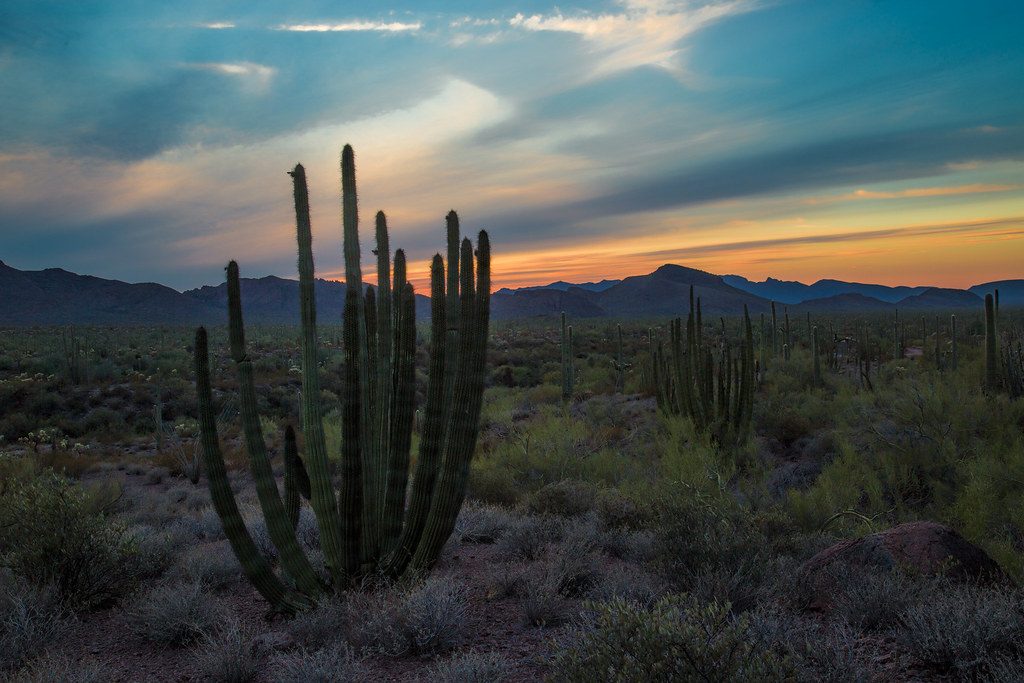 In parts of Organ Pipe Cactus National Monument (pictured above) and in the adjacent Cabeza Prieta National Wildlife Refuge,
a well will be drilled every 5 miles along the border. Photo by Robert Shea.

While the connections between wall construction, groundwater depletion, endangered wildlife and religious freedom of Native cultures may seem tenuous to outsiders, most of the Sonoran Desert dwellers present at the protest recognize that those issues are linked wherever land development goes unchecked in arid landscapes. Access to water is obviously essential to the survival of wetland plants, aquatic reptiles and amphibians, obligate birds of riparian forests, and all humans – whether residents or recent refugees. Of course, the concentration of all lifeforms intensifies around even the most modest springs, seeps, streams, ponds and reservoirs in otherwise dry landscapes.

While most desert dwellers take that fact for granted, relatively few Americans recognize that drilling wells, pumping groundwater and mixing cement to build footers for Trumps border wall will have long-term consequences for endangered wildlife all along the 2,000 mile border. In fact, some biologists feel that new drilling — for one new well every 5 miles across the boundary lines of national parks and wildlife refuges—- may generate some of the most lasting threats that already-imperiled fauna will suffer over the next century.

Aquatic biologist Michael Bogan, one of my colleagues at the University of Arizona, minces no words when he lays out this issue to the unacquainted:

“The Quitobaquito springs in Organ Pipe have been a stable source of water for thousands of years… In fact, it’s essentially the only stable, reliable water in all of the western Sonoran Desert.”

Quitobaquito is not the only spring being imperiled along the border, but is the only source of surface water in Organ Pipe Cactus National Monument for 20 miles in every direction. (The national monument, a UNESCO biosphere reserve, is located in extreme southern Arizona and shares a border with the Mexican state of Sonora.) Most desert springs in the borderlands are like magnets for migratory wildlife, especially during drought years.

Over my 40 years of visiting such artesian springs and wetland cienegas along the borderline, I have personally witnessed the awesome but unlikely arrivals— glossy ibises, white pelicans and anhingas landing to drink and feed after crossing dozens or hundreds of miles of dry desert landscapes. I have identified not one but two kinds of mud turtles lingering in the shallows near cattails and rushes — the federally-listed Rio Sonoyta mud turtle, and its more common kin, the Arizona species. Over the years that the endangered Rio Sonoyta turtle has been surveyed, its numbers were slowly declining even before wall construction began. But as my old friend, herpetologist Phil Rosen, has explained, the writing is on the wall with regard to how both climate change and groundwater pumping for wall construction may ultimately affect this aquatic species:

“Declining rainfall and pond levels may be directly and indirectly related to the apparent reduction in mud turtle numbers at Quitobaquito. Effects may be realized through higher temperatures, altered food availability, increased competition with [endangered] pupfish, or some other factor. ”

Because of the risks to endangered species from any additional groundwater pumping near Quitobaquito Springs, the National Park Service has dissuaded the Army Corps of Engineers from drilling a new well immediately adjacent to this rare, artesian water source. But elsewhere in Organ Pipe and in the adjacent Cabeza Prieta National Wildlife Refuge, a well will be drilled every 5 miles along the border. One analysis has projected that between 1.7 million and 3.7 million gallons of freshwater will be required to build every 5 miles of the new border wall through these two protected areas in the most arid reach of the Sonoran Desert—just where both surface and ground water are scarcest.

Overall, the 100 miles of wall that will be constructed along the Arizona-Sonora border will consume upwards of 50 million gallons of water to build the footers for the steel slats which will tower over the border itself, in addition to what may be required for dust control during the 14 months of construction. 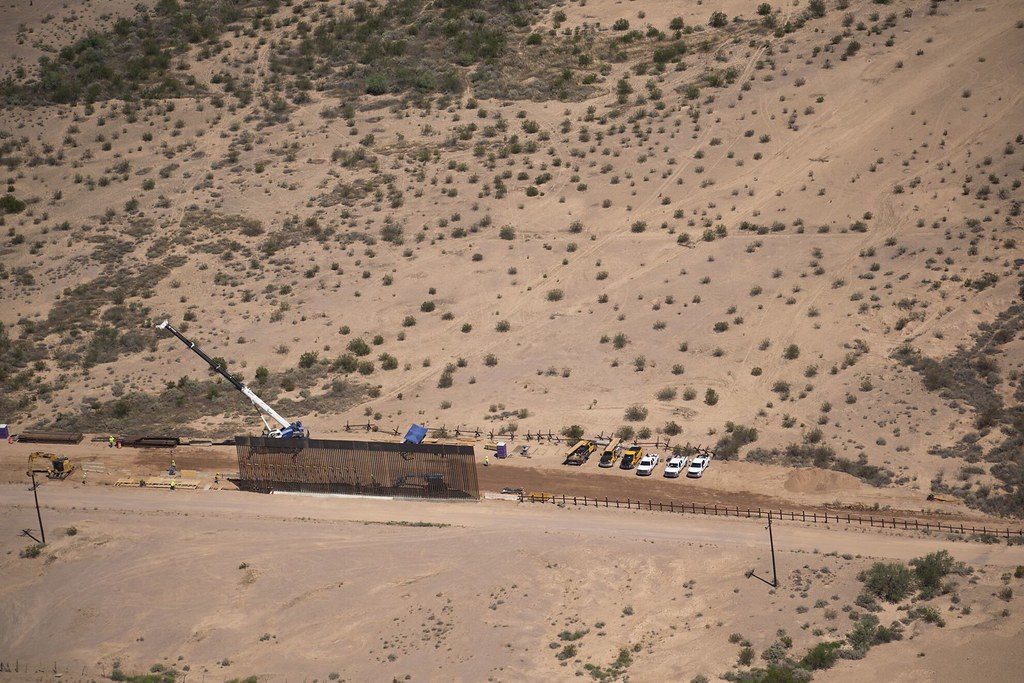 Hydrologist Hector Zamora — who spent years studying the fossil groundwater beneath this reach of the border, has laid it on the line:

“It is hard to imagine there’s not going to be an impact on the springs…You don’t need to withdraw all the water in the aquifer too see the effects.. If the water table drops only a few feet… you will no longer see the springs.”

My own studies with a binational team of biologists have determined that when O’odham Indian farmers and foragers lived around the springs, the Quitobaquito oasis was the most biodiverse landscape for 50 miles in any direction. More than 270 vascular plant species and well over a hundred bird taxa have been historically recorded there. But with groundwater declines, the reduction in pond size, and drying up of wet meadows, both plant diversity and vertebrate diversity have been in steep decline ever since government agencies took over its management from the Native Americans.

If such impacts along the border were restricted to just a few springs and water holes in Organ Pipe and in the Cabeza Prieta National Wildlife Refuge to the west of the park, perhaps they could be written off as an unfortunate aberrancy. But these threats to endangered wildlife are not a special case.

Two hundred miles east of Quitobaquito Springs on the edge of the Chihuahuan Desert — at San Bernardino National Wildlife Refuge — the anticipated effects may be just as grave.

Along that stretch of the borderline, Homeland Security Officials estimate that their contractors will require 83,000 to 100,000 gallons of water per day or up to 700,000 gallons per week. Based on those projections, the level of the aquifer at San Bernardino could decline as much as 14 feet within the first month of groundwater pumping.

Where that reach of the international border cuts through Chihuahuan Desert, wall construction is expected to continue for over 500 days. Aquatic as well as terrestrial habitats utilized by rare species on both sides of the international line will likely be affected. In San Bernardino, riparian gallery forests and extensive wetlands seasonally harbor migratory sandhill cranes, as well as gray hawks, zone-tailed hawks and peregrine falcons.

Amazingly, courts have allowed Homeland Security to waive consideration of 41 federal and state laws to proceed with border wall construction. And yet, two major court decisions on the wall are still pending — the Trump administration cannot waive the Constitutional right of the O’odham to religious freedom for their place-based spiritual practices at Quitobaquito.

With hope in their hearts, the border protestors at the wall last month have already begun to plan ways to legally decommission the wall, to recycle its metal and concrete for higher purposes, to restore desert or wetland vegetation to its former bounty, to offer access to precious and sacred sources of water once more. Ironically, the first border barrier constructed at the Arizona-Mexico boundary in 1915 was taken down in Nogales within 4 months of construction because of binational public outcry. There is no legal reason that the fate of Trump’s wall will not follow this historic precedent.

Gary Paul Nabhan is a political ecologist, ethnobotanist and Franciscan brother who lives within sight of the lights at the US-Mexican border. He has been engaged in field studies of sacred springs and biocultural diversity in the Sonoran Desert for 40 years.

How Farmers Can Survive Tariffs

In America’s farm country, the fear is palpable. In recent months, I’ve talked to dairy farm owners in Wisconsin, grain…