An ancient spring near Lukeville has slaked the thirst of desert travelers for centuries, but its days may be numbered as groundwater is pumped to build a 30-foot border wall.

Water has bubbled out of the granite at Quitobaquito Springs for thousands of years, making it a key watering hole for the Tohono O’odham, Spanish missionaries, U.S. and Mexican boundary surveyors, and countless other humans and animals.

The Trump administration decided to build a wall along 44 miles of the border in Organ Pipe Cactus National Monument, where the springs are located, and the adjacent Cabeza Prieta National Wildlife Refuge.

Now, federal officials plan to pump millions of gallons of groundwater — some of which dates to the last ice age and feeds the springs — to mix concrete and to spray water on the dusty road where contractors will build the border wall.

At the request of the National Park Service, Border Patrol officials said new wells will not be dug within 5 miles of the springs and water levels will be monitored during construction.

Hydrologists at the University of Arizona caution that drilling anywhere in the aquifer could affect the springs.

“It’s hard to imagine there’s not going to be an impact on the springs,” said Hector Zamora, who wrote his doctoral dissertation last year on the origins of the water in the area of Quitobaquito Springs and the Sonoyta River, which runs on the south side of the border a few miles from the springs.

“You don’t need to withdraw all the water in the aquifer to see the effects of pumping,” Zamora said.

“If the water table drops only a few feet, due to groundwater pumping, you will no longer see the springs,” he said. “We know from the Sonoyta River that not too long after irrigation started in the valley, the perennial reaches of the river started to dry out and disappeared.”

If the wells are dug 5 miles from the springs, then the wall construction likely will “contribute to an ongoing decline,” rather than an immediate threat, said Thomas Meixner, a hydrologist at the UA who helped oversee Zamora’s research.

When 5 miles of 15-foot metal-mesh fence were built near Lukeville a decade ago, an environmental assessment of the project said water would be brought down from Ajo and Why, which would protect the groundwater that feeds Quitobaquito Springs.

The analysis estimated between 1.7 million and 3.7 million gallons of water would be needed for the 5 miles of fence. The new wall will run for about 44 miles, or nearly nine times that length.

This time around, the plan is to use existing wells near the border and to dig new wells, according to documents filed by the Border Patrol in a federal lawsuit.

Trucking water from Ajo and Why “certainly sounds like a better option” for the environment, Meixner said.

Two weeks ago, workers with Southwest Valley Constructors, an Albuquerque firm that was awarded a $646 million contract, were in the early stages of replacing the 5-mile stretch of metal-mesh fence east of Lukeville.

A water tanker drove up and down the road next to the border spraying water, and wet cement poured down a chute to fill a 7-foot trench for the wall’s foundation.

On the west side of the port of entry, trucks bearing the logos of a drilling company, along with a backhoe that went airborne for a moment after it hit a dip in the road, barreled down the dirt-and-gravel road that leads to Quitobaquito Springs a dozen miles west of Lukeville. 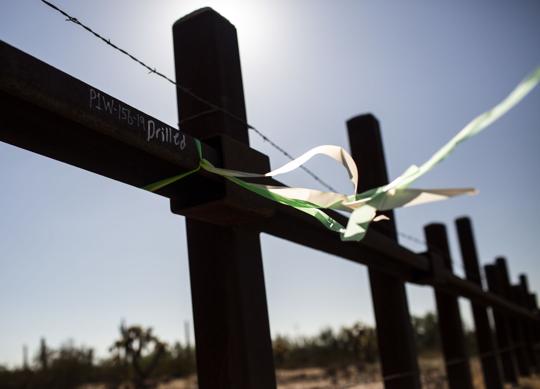 A ribbon hanging off a section of border fence west of Lukeville blows in
the wind Wednesday, Aug. 28, 2019.

The contractor wants “additional groundwater wells within the Roosevelt Reservation (i.e. the portion of land that occurs from the international border to 60 feet north) and various locations of the project to support the water needs of the project,” according to the Tucson Sector.

The Border Patrol did not provide information about the depth and specific locations of the wells, but said the contractor needs 84,000 gallons of water per day.

The construction near the Lukeville port of entry is estimated to last 45 days.

Construction on other wall projects in Southern Arizona could start as early as October. Projects announced last week included nearly 70 more miles at a cost of $1.26 billion.

Officials waived the need to study the environmental impact of the wall earlier this summer, leading to several lawsuits and widespread news coverage.

On Friday, Customs and Border Protection announced the agency is creating an environmental stewardship plan to show the potential impacts of wall construction on more than 60 miles of the border in Pima and Cochise counties.

The stewardship plan is a “poor replacement” for the rigor of a National Environmental Protection Act review, Serraglio said. If the plan were “serious,” he said, it would have been done before the project started. 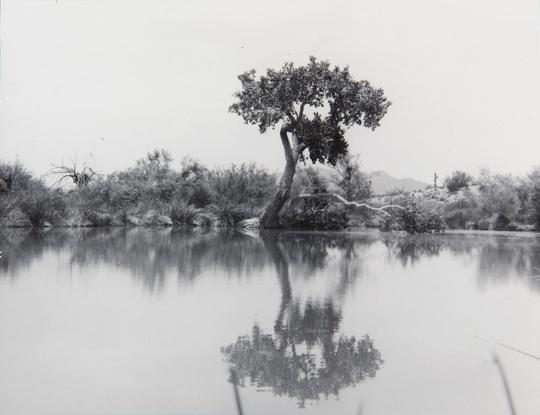 Water flow at Quitobaquito Springs, seen here in 1962, has steadily declined
since the 1970s.

Scene at the springs

The broiling desert air drops a few degrees as the smell of water wafts through mesquite trees beside the pond at Quitobaquito Springs.

On a recent afternoon, a thin trickle of water babbled down from the hills along a concrete bed and emptied into the pond. Two-inch-long Quitobaquito pupfish twisted and swirled in the shallow waters of the stream, one of the only places in the world where the endangered species lives. Another endangered species there is the Sonoyta mud turtle.

A pair of simple wooden benches sit on either side of the spring next to a foot trail. White-beaked coots meandered near the reeds, periodically quacking or dipping their heads into the water. Yellow-breasted birds swooped overhead and nipped the surface of the water.

The roar of engines on Mexico’s Highway 2, which runs parallel to the border from Lukeville to San Luis Rio Colorado, the border town south of Yuma, faded to a low rumble beyond the trees.

This area entered the national spotlight earlier this year when hundreds of migrant families from Guatemala, Honduras and El Salvador were dropped off next to the highway. The families made their way through about 50 yards of brush and ducked under the rail-and-post fence at the border. They then surrendered to Border Patrol agents and asked for asylum from the violence, corruption and poverty they were fleeing.

Before the highway was built, a much different kind of traveling took place near Quitobaquito Springs.

“Before air-conditioning, it was heaven,” said Gary Nabhan, a widely cited Southern Arizona researcher who has studied the springs since the 1970s. “Can you imagine sitting under a cottonwood with the breeze coming in from over the cool water?”

Human artifacts there date back 16,000 years

The springs are one of a string of ancient watering holes that sustained travelers who moved by foot, mule or horse through the brutal heat of the desert between Sonoyta and Yuma.

Unlike many of the other watering holes, Quitobaquito was fed by a spring and “always had fresh, drinkable water,” rather than collected rainwater that could quickly grow algae, Nabhan said.

For centuries, the Tohono O’odham and others used the springs as they crossed this remote area of the Sonoran Desert, and for some, it was a place to live.

In the soil around the springs, archaeologists have found artifacts dating back 16,000 years, according to the National Park Service.

The springs are “sacred to the O’odham” and “even to the present day, the O’odham continue to visit the monument to collect sacred water from the Springs, to gather medicinal plants, and to harvest the fruit of the organ pipe and saguaro cactus,” according to a July 19 brief filed by the Tohono O’odham Nation government in a lawsuit opposing construction of the border wall.

Members of the Hia C-ed O’odham recalled childhood memories of eating figs and pomegranates from the trees near the springs and watching a burro help grind wheat, according to oral histories compiled in the 1980s by Ofelia Zepeda, a renowned Tohono O’odham poet and linguist.

Spanish missionaries and explorers used Quitobaquito Springs and the line of watering holes on their way to California in the 16th and 17th centuries, according to archives at the National Park Service’s Western Archeological and Conservation Center in Tucson, which holds an array of accounts compiled by park service historians.

Gold prospectors in the mid-19th century used the springs on their way to California, and in the 1860s a dam was installed to create the pond, which has been renovated several times.

Stores were built by the springs, including one believed to have been owned by Albert Steinfeld, a pioneer merchant whose name still stands on the Steinfeld warehouse in downtown Tucson.

U.S. and Mexican surveyors stopped at the springs for water when they were retracing the international boundary in the 1890s.

In 1907, an agent with the Department of Labor and Commerce who blocked Chinese immigrants from entering Arizona made the springs his headquarters.

U.S. soldiers chased men in Pancho Villa’s army in 1917 and found an abandoned camp near Quitobaquito.

To prevent cattle from trespassing from Mexico, the U.S. government set up a station in Quitobaquito in 1949. To supply the station, they replaced the earthen dam with a concrete dam and installed a 1,000-foot pipe.

The National Park Service bought the springs and the nearby land in the late 1950s from the Orosco family, a Hia C-ed O’odham family that had lived there since the 1880s. 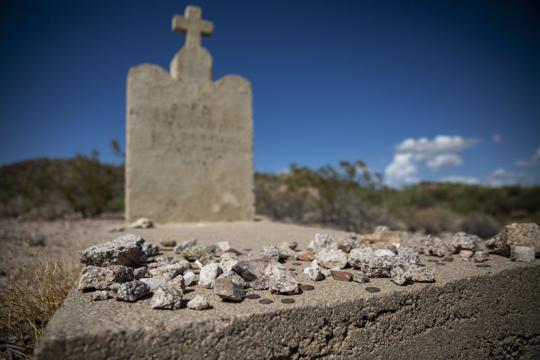 Rocks, coins and various other items pile up on the grave of Jose Lorenzo Sestier
near Quitobaquito Wednesday, Aug. 28, 2019. Sestier, a Frenchman, was
a store manager in the area.

Today, a cement gravestone from 1900 sits atop a mound north of the spring. The Frenchman entombed there died at the age of 74 after working in a store by the springs.

Stones and coins were placed neatly on top of the grave, a custom of travelers wishing for a safe journey. Some of the coins have long since been blackened by the sun, but others show they were Mexican and U.S. coins dating from 1968 to 2015.

“A place that has saved people’s lives”

Nabhan grew quiet when talking about the border wall construction. He feared what would happen to migrants who were pushed farther into dangerous desert by the wall.

“This is an attack on a place that has saved people’s lives for centuries,” he said.

The springs also are “personal” to him, he said, and his son was baptized at the springs by a Catholic priest and a Tohono O’odham elder.

“I can’t tell you what it means to me,” Nabhan said, as his voice grew husky with emotion.