Something other than coffee is brewing at Exo Roast Co. Along with the typical coffee beverages like lattes, cappuccinos, and chai, Exo Roast Co. also offers something with a little extra kick to it—a chiltepine cold brew.

From the very beginning Smith knew he wanted to incorporate local ingredients into his menu. As someone who likes the sweet, savory combination of chocolate and chile, Smith wanted to play around with chocolate, chile and coffee. Chiltepine peppers seemed like the perfect of local spice.

Chiltepine is the only native chile to the United States and one of the places it can be found is here, in the Sonoran Desert. According the Native Seeds Search website, chiltepines are important to the economy of Sonora.

But chiltepines have a unique spice to them. Unlike jalapeños, chiltepines spice doesn’t linger long. It has a pepper pungency to it that hits the back of the throat and then goes away.

“Often times you see dried red chiltepines next to salt and pepper on tables,” said Gary Paul Nabhan, Ph.D. Nabhan is an Ethnobotanist and Agricultural Ecologist who has extensively studied the Southwest desert.

Nabhan has done research focused on chiltepines and has published three books that mention the unique, Sonoran pepper. 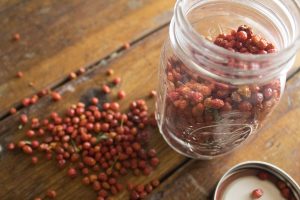 Chiltepines grow wildly in areas of Mexico, New Mexico and some parts of Arizona, but these chiles take special climate to grow properly and without the right weather they may die, Nabhan said.

“They grow best in the fall,” Sheryl Joy said. “That’s when they can be harvested and picked.”

Chiltepines have been harvested in Northern Mexico and Southern Arizona for years, but recently climate change has taken its toll.

“They are very vulnerable to freezes,” Nabhan said. In the last 10 years chiltepines have faced difficulty growing.

Nabhan thinks more than half the chiltepines growing in Northern Mexico and Southern Arizona were killed years ago due to these changes in weather.

“Then it takes a long time to re-sprout from the base or seedlings to repopulate”,” Nabhan said.

The land chiltepines grow best on is in the Tumacacori Mountains in Santa Cruz County. Here is where the Wild Chile Botanical Area is located.

The Coronado National Forest protects the 2,500-acre of land and it is where chiltepines thrive. Preserving this land is crucial to the health of the chiltepines, Nabhan said.

Elena Gonzalez is a reporter for Arizona Sonora News, a service from the School of Journalism with the University of Arizona.