In his new book, Mycorrhizal Planet, Michael Phillips weaves his own web of what holds this earth together.

Our knowledge of how habitat restoration and regenerative agriculture work – how they proceed or falter – is being renovated as we speak.

A new sense of how symbiotic mycorrhizae shape plant establishment and succession has been slowly emerging over the last quarter century.

In his new book, Mycorrhizal Planet, Michael Phillips weaves his own web of astounding connections regarding “what holds this earth together.” Not since Paul Stamets’ pioneering inquiry, Mycelium Running, have we been blessed by such a synthesis that tells how symbiotic fungi are the true and most trustworthy stewards of this planet. 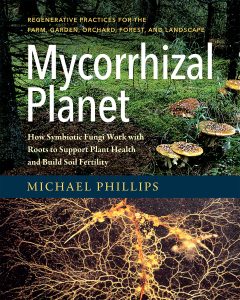 With his usual genius of explaining complex science in ways farmers and restorationists themselves can grasp, Phillips reminds us that those in Washington DC have never really “run this country,” our fungal allies have.

This is the book you’ll need to begin your own forest garden in 2017.

Be on the look for Mesquite: An Arboreal Love Affair my forthcoming book from Chelsea Green Publishing

Be on the look for Mesquite: An Arboreal Love Affair my forthcoming book from Chelsea Green Publishing, with a forewood…

Gary: We are being hosted by Bonnie McKinney, Wildlife Coordinator of the El Carmen Land and Conservation Co. LLC, and…

We must all take an oath, to do no harm to others.

in the darkest of times where I go

in the darkest of times where I go, is to a place somehow hidden in the midst of pain a place where microbursts of light breaks through to reach us a crack of light like the very one you may have seen on stormy days right at dusk when darkness tried enveloping entire skies but failed fails because the sun sent out a calla grace note so bright it cut across the horizon right into our hearts

There is No Such Thing as the World’s Best Tomato!

Dear Jere Gettle and Friends at Baker Creek Seeds, Have you gone nuts or just gotten greedy? THERE IS NO…

Pilgrimage for Justice Across Borders for All Children – She’s on your case Mr. Sessions.

Don’t talk to me about your patriotism, Mr. Sessions, When you won’t protect our country from the Russians, From Koreans…

Gary: Tell me, cousin Kristy, what questions are going through your head right now. Kristy: Thanks for asking this, Gary….

Gary: Do you know what really touched me today Kristy, while you were talking to the mothers from Guatemala and…

‘Put ourselves in others’ shoes, and to go beyond the sound bites.’

Gary: Where else are we seeing signs of hope along the U.S.-Mexico border? Kristy: In the person of Marcos Paredes,…

Earth Day as a Sacred Rite

Fifty-Two Palestinians Killed and 2500 Injured by the Israeli Military in Just One Day, as Jared Kushner and Ivanka Trump…

We have met migrants and refugees from many Central American and Mexican landscapes who just want to be safe.

Pilgrimage for Justice Across Borders for All Children: Preamble

When Kristy Nabhan-Warren & I set off today (celebrating her birthday along the way), we will be traveling at least…