Living, Dying, and Eating in the “Day of the Dead” Belt

To properly celebrate Día de los Muertos, we must do one thing: offer our deceased loved ones the food that feeds their souls.

Other regions of North America may claim that they are the Corn Belt or the Bible Belt, but here in Tucson, we cling to the buckle of the cinturón of Day of the Dead. In an arc stretching from New Orleans through San Antonio and Albuquerque, from Tucson to Yuma and San Diego, the Dia de los Muertos is not just one kind of celebration, but many.

Hispanic families in New Mexico celebrate it differently from recent immigrants from Mexico who have landed in L.A., or from various Native American villages in southern Arizona. Catholic or not, Spanish-speaking or not, the Day of the Dead touches and motivates people of all races and cultures to get into the graveyards or out on the streets to mourn, grieve, celebrate, or eat in the company of our ancestors.

While how they celebrate New Year’s, Independence Day, Christmas, Passover, Ramadan, or Columbus Day may define other cities’ collective cultures, Tucson’s spirituality and vitality are best defined by our communal expressions shared on the Dia de los Muertos. Not only do we host the longest and most elaborate All Soul’s Procession found anywhere in the U.S., but it annually morphs out of its old skin like a venerable rattlesnake that meanders through our downtown for hours on end.

The Dia de los Muertos is not merely about making space in lives and prayers for our ancestors, as the guidebooks say. It is also about mothers grieving their children killed in drive by shootings, about young men and women going off to war but never coming back, and about formers lovers, partners, or friends ravaged by AIDs, drugs, or alcoholism. It is about sharing a meal with unborn children as much as it is about offered abuelos and bis-abuelos their favorite foods and drinks.

Since the late 1960s, the sad reality is that celebrations in southern Arizona are as much about mothers mourning the premature loss of their children as they are about remembering the wisdom and wit of our elders.

And yet, the wit of our elders lives on. I absorbed some of the wickedly funny expressions of the Day of the Dead while moving back and forth across Pimeria Alta, from Tucson and Three Points to Ajo and Lukeville. In that landscape, Mexican Catholic traditions have melded and mutated with O’odham sensibilities in ways that still startle, puzzle, and humble me.

After my longtime friend and mentor Laura Kermen died in her home village of Topawa, her friends and relatives invited me to come out and share the Night of the Dead with them in the cemetery within walking distance of their rancheria. They knew that she had lived in Tucson in her teens among Anglos and Mexicanos, and that she returned to live there again late in life, sometimes with my own family.

But I was a bit unsure when the commemoration would begin, so a few days before Halloween, I drove into Topawa on my way from Tucson to Organ Pipe Cactus National Monument, where I was to camp for a couple nights while doing fieldwork.

As I arrived near the gate to the cemetery, I could see one old man diligently raking all the debris and leaves from around each grave marker, and stashing any trash that had blown in under the fence into an old tin garbage can.

“Excuse me, I’ve been invited out to here by Laura Kermen’s kin. I thought I could find one of them cleaning up out here and learn when their commemoration begins for Day of the Dead.”

“Well, there. Pegi, I guess it should be going all night long in about three nights from now. But it has already begun. Families are preparing food to give to the deceased. Everyone pitches in, you know. Do you have any food to leave for her?”

“On her grave, o’er there.” He nodded to his right.

“Well, I have some camping food in my car right now, can I leave it there for the family to take care of?”

I went to my truck and got out some canned food to leave on her grave, then walked back into the cemetery, found her gravestone, and place the cans before it. Wolf Brand chili. Arizona Ranch Style Husband Pleasin’ Beans.

‘Thanks for your help,” I waved to the old man. “I’ll see you in three days.”

“Well, you didn’t leave very much for her. You’d better come back in two days and leave her more food. I mean, we don’t know whether she’s eaten anything since she passed that way.” He gestured upward.

“Okay, I suppose I can bring by more food on the way back from Ajo.”

“That sure would be good. By the way, aren’t you a Franciscan Brother or something? Could you say a prayer here over my mother’s grave before you go?”

“Sure. Blessed Creator of all Life…”

“No, I mean in Latin. Like the old prayers. My mother said they were more powerful.”

“Latin? But I barely know more than…”

“Latin. Just a little. My mother loved how it sounded, so mysterious.”

“Thank you Father,” he said quietly.

“I hope its okay, but I’m a Brother not a Father. See you in two more days.”

I wanted to check the exact time that the commemoration would begin at the cemetery, so I dropped by again on my way back from Ajo to Tucson. In Why, Arizona, I had bought some more canned goods to leave on Laura’s grave. But when I parked the truck just outside of the gate of the camposanto, I saw some badly dented cans of Wolf Brand chili and Husband Pleasin’ beans there in the dirt more than 30 yards away from where I had left them on Laura’s grave.

I was baffled. I didn’t move, except to scratch my head. Pretty soon, the old man saw me immobilized there next to the pick-up. He quietly leaned his rake up against the garbage can, then came over to where I stood.

“I think you made her pretty mad. Those canned goods wasn’t her favorite foods. She didn’t like that stuff. It’s as bad as commodity foods. I was leavin’ the cemetery just before dusk last night, when all of a sudden these cans come flyin’ over my head. One nearly hit me. She musta thought I had let you put them there. Poor Laura.”

Ohhh. I was so humiliated, confused, and unsure what to do next. I said nothing.

“You know, you’d better come early tomorrow and try to cure this, because who knows what else might happen if you don’t. You’d better bring her what she really likes: Hegam ciolim, those cholla cactus buds. O’am bavi, those little yellow-brown tepary beans. Kui wihog, some of those mesquite beans too.” 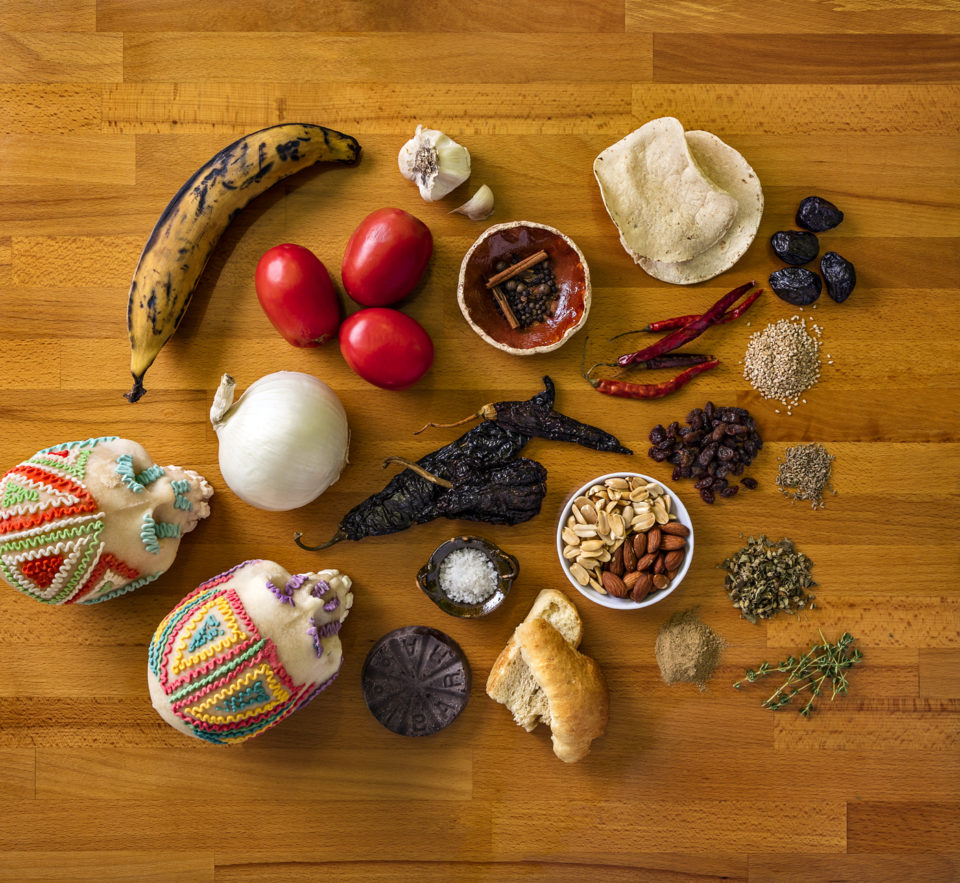 The old man didn’t have to say anything else. If I was to really honor the legacy of Laura—what she taught so many of her own people as well as those of us who were naïve newcomers to the desert as well— I had better learn to nourish our relationship with the old foods she had told me so many stories about, stories that harked all the way back before Arizona statehood when she was just a girl.

I learned from that old man and perhaps from Laura herself that on the Day of the Dead, it truly matters what we feed our deceased loved ones, just like it matters what we feed our youth, every day and night that they are alive and breathing and eating with us on this blessed earth, the one true table of conviviality for all of those who choose to see it in that manner. It matters, because matter matters if we truly believe that this entire Desert Planet is as sacred as the Watery Heavens above it all.

And should you wonder about such things, I never bought Wolf Brand chili or Husband Pleasin’ beans again after that simple lesson.

Brother Coyote occasionally stops by the Edible Baja Arizona office to leave a gift of sorts on the doorstep, then disappears again for weeks on end. His only other known pieces of writing are short poems he calls aflorisms in a little book called Sown by Hand.

Photo by Steven Heckler, from “Death Becomes Us,” which ran in September/October 2015 issue.

All have stressed the need to heal the divide that is expanding between us.

Cousin Gary Nabhan and I are having an enriching, educational, and all-around incredible time here on the U.S.-Mexico border. In…

There is No Such Thing as the World’s Best Tomato!

Dear Jere Gettle and Friends at Baker Creek Seeds, Have you gone nuts or just gotten greedy? THERE IS NO…

Deeply Inspired by the Remarkable Food Justice and Social Commentaries from the staff at La Semilla Food Center.

How do we rekindle our hope during the darkest of times? With regard to the current crisis at our border,…