A New Climate for Farming

Feeling the heat yet? The summer of 2015, the hottest in recorded history, melted roads and killed thousands in India and Pakistan. It also prolonged a crippling drought in the American West that triggered controversial water usage restrictions in California. While it can be hard enough for people to cope with these conditions, what about our food systems? How will farmers and gardeners adapt to this harsh new reality?

To answer this question, author and ethnobotanist Gary Paul Nabhan set out to discover the secrets of farmers who’ve dealt with drought and heat for thousands of years. He shares those answers in Growing Food in a Hotter, Drier Land: Lessons from Desert Farmers on Adapting to Climate Uncertainty.

WORLD ARK: Did writing the book help you feel less helpless in the face of the drought that’s been haunting your home state of Arizona?

GARY NABHAN: I was disoriented by the catastrophic and unseasonal weather events we were having that damaged food crops, and I saw that you can’t have just one strategy for dealing with climate change. You have to deal with wind, heat and water stress, plus catastrophic freezes in some places, so there can’t be a simple silver bullet formula. We need multipronged adaptation and the building of resilience through diversity.

What most surprised you about your research?

The biggest surprise for me was realizing the answers are less about having adapted seeds and more about having adaptive farming systems. Those who have lived in arid lands for millennia have developed strategies that can be shared with other parts of the world now facing weather unpredictability, like drought.

Does the U.S. have time to adapt to what’s coming?

While the U.S. has buffers in place like crop insurance that other countries don’t have, there’s been denial that the situation could get serious. But even in Arizona people are remembering strategies that have been neglected for years. So it’s not that we’re unprepared, it’s that we’re rusty at dealing with this and need to hear from others who have answers that we haven’t employed. So I don’t think we’re starting from scratch. That’s one reassuring message from the book. People who just 10 years ago wouldn’t have picked up a book like this are incorporating its concepts into their repertoire of strategies for being a good gardener or farmer. 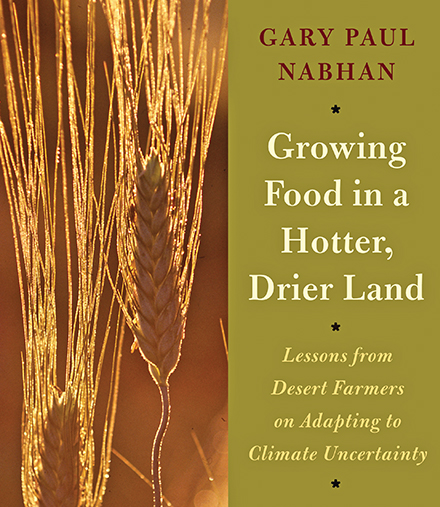 It’s been a couple of years since the book was published. Are there any updates you would include now?

I would include the micro-aspersion irrigation systems that are hybrids of old technologies and modern drip irrigation, where you put porous bulbs at the end of drip irrigation lines buried in the soil that disperse water deeper into the soil over a longer period of time. And their size makes them harder to damage than big clay pots (i.e. ollas, which have been used in this manner traditionally). So people are hybridizing old and new methods rather than just looking backward.

Another thing I couldn’t cover adequately in the book because it was just emerging at the time is an increasing trend in developed countries of growing vegetables in the partial shade of solar collectors mounted on high posts, which gives the plants a cool-down, which increases yields. So it’s solar farming, getting electricity and food from the same piece of land.

I love that you focus on sharing information and ideas with neighbors. How important is that community aspect to increase agricultural resilience?

It’s huge. We can’t save food systems through the efforts of just one inspired innovator, we need whole communities innovating in the same way. I just visited a farmer in northern Arizona who is trying to develop water-conserving techniques, but he’s surrounded by people pumping groundwater to irrigate pecan trees, so even though he’s conserving water on his farm, the aquifer under him is declining. We need communitybased strategies, like we do for fighting pollinator decline. Attracting pollinators to a single farm when the neighbors are using insecticides or herbicides that kill bees and their host plants proves that no one can do this alone. A community supplies feedback and mutual support, so that when someone figures out a problem, the solution can be adopted by the neighbors. It’s positive economically and socially, rather than a scenario of everyone being in this for themselves.

Besides capturing water for irrigation, the book also talks about harvesting nutrients as part of the same operation. How important is this second piece?

While any good harvesting system delivers water, it doesn’t take that much extra effort to get the nitrogenrich detritus that sometimes comes with it incorporated into your soil through simple techniques. I think it’s the hidden benefit of water harvesting in legume-dominated ecosystems, which the savannas of Africa, Australia and the U.S. are. There’s a place 25 miles from me that’s capturing a million gallons of nutrient-rich water a year through water harvesting for a 4-acre orchard and a nearby pasture.

In just two years, some of the fruit trees are already 20 feet tall from the added nutrients. The growth rates are just extraordinary. Techniques like this have been used in Senegal and other African countries, as well as in Mexico and the U.S. I think it will become more and more widespread in the arid lands.

How important are perennials to your vision of a more drought-proof food system?

What would your drought-proof farm of the future look like?

I imagine having not just multiple crops but multiple life forms. I’d want deep-rooted cacti, legume trees, succulents like agave or century plants, and vine crops with deep roots. It would be more labor intensive than what we get away with today with our fossil fuel usage. My orchard has 150 fruit varieties, and even though not all of them do well every year, I will always get a bounty since they produce at different times and in a staggered manner. And they give me a diversity of nutrients along with adaptation to climate uncertainty, because when we have catastrophic events, there will be quicker recovery if we have that variety than if we had put all our eggs in one basket.

To learn more about Gary Nabhan’s work as a writer, conservationist and farming advocate, visit garynabhan.com.