An Open Letter to Governor Ducey

When you signed the 2016 state budget into law this spring, many Arizonans were unlikely to understand how your decisions might harm their own future health. They did not fathom that your budget-cutting measures are a deferred maintenance scheme that fails to deal with costly public health issues—and fails to adequately support the 600,000 Arizonans who suffer from diabetes today, or the 1.2 million people plagued by obesity. The hundreds of millions of dollars that you cut from hunger relief, Medicaid, nutrition education, and disease-prevention programs in the state will not “save” the taxpayers anything. These cuts will only exacerbate systemic problems and increase future costs, especially to tribal communities and Hispanic and African Americans who are particularly susceptible to these diseases in our state.

Let us explain how this is a food justice issue. The number of children living in persistent poverty in Arizona has increased 37 percent since 1990. And yet, not only did you cut $9 million out of relief programs that might help these children, you also limited the number of years that their parents could draw upon such programs. This gives many poverty-stricken families no other option than buying cheap foods with empty calories—and often these foods have so little nutritional value that they only increase the frequency of obesity and diabetes. It’s a vicious cycle.

You also made significant cuts to Medicaid that will limit access for our elderly citizens to such programs. You derailed the transportation services that formerly brought them into health clinics that offered guidance on eating well and preventing diseases. And while across the country most state budgets now include a line item for diabetes education and prevention, Arizona’s budget does not.

In 2009, the legislature cut $59 million from the University of Arizona Cooperative Extension budget, adversely affecting farmers, tribal herders, urban gardeners, and 4-H programs for kids. Now you have cut an additional $109 million from the budgets of the three state universities. Their programs have been responsible for much of the research and training in nutrition, disease prevention, and medical care in our state.

You also axed the budgets of our community colleges, which train many culinary professionals, dieticians, and nutrition counselors who promote healthy eating practices. Per student, Arizona’s colleges have suffered a loss of funding greater than that of any other state, and our college graduation rates are now the lowest in the nation. 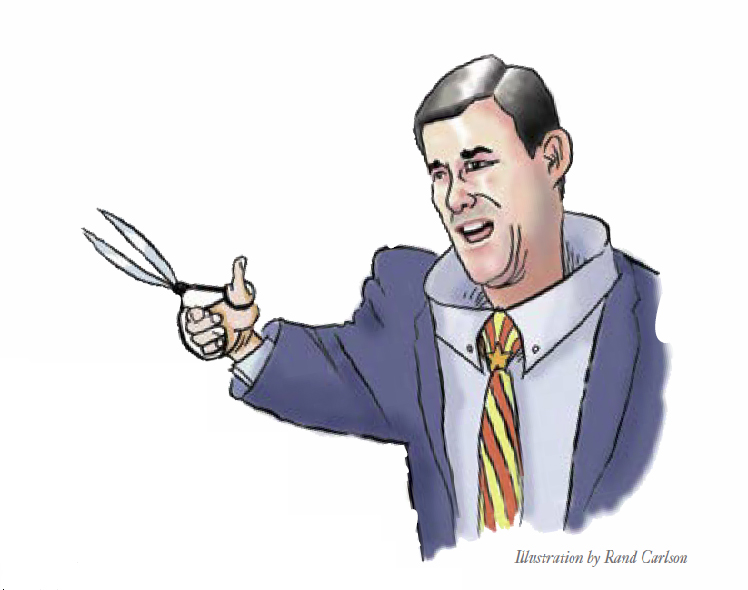 These “penny-wise and pound-foolish” policies have contributed to a public health crisis with human and economic costs of epic proportions. By 2012, the medical treatment costs for the 470,000 Arizonans with a diagnosis of Type 2 diabetes had already reached $4.76 billion a year. That bill was higher than the $4 billion that Arizona farmers and ranchers received for growing all the food and fiber produced in our state the same year. But since that study was done, the number of Arizonans given a diagnosis of diabetes has been increasing by 11 percent every two years. What does that mean for our future?

By 2017, the cost of treating all Arizonans with diabetes will approach $5.8 billion a year. Two-thirds of this bill for diabetes care will need to be covered by state and federal budgets—which is to say, by taxpayers. If diabetes goes unchecked, every year $3.6 billion of our taxes will go to care for Arizonans who suffer from this nutrition-related disease. It will be the ultimate price we pay for the state’s deferred-maintenance plan, making the “money saved” by the new state budget as ephemeral as an ice cream cone on a hot summer’s day.

Isn’t it time to redirect Arizona agriculture so more of the healthy food our farmers produce becomes accessible to the poor, the elderly, and the youth of our state who need it the most? Isn’t it also time to discuss whether our precious water would be better used to grow nutritious food crops for state residents whose health is at risk than to grow cotton and other commodities to be shipped overseas?

Governor Ducey, we invite you to tell our readers and our state’s taxpayers what your next budget will do to stem the tide of Arizona’s rising public health crisis. ✜