Q & A – Growing Food in a Hotter, Drier Land

Ben Watson: What does global climate change have to do with America’s failure to produce more food than its people consume for the third straight year?

Gary Nabhan: For starters, we had over 2,200 counties declared national drought disaster areas in 2012, four times more than in 2011. Farmers applied for $13 billion dollars of federal insurance due to crop failures and reduced yields, more than twice the running average per year. Increasingly unprecedented climatic disruption is affecting farmers, ranchers, foragers and fishers more than ever before, and yet big agriculture’s lobbyists like the American Farm Bureau Federation deny that we’re entering a “new normal.” Sadly, that disadvantages its own rank and file members by not developing programs that prevent crop failure, as if crop insurance for more failed farms will be sufficient.

Ben Watson: Can farmers and food producers really do anything significant to combat or even lessen the effects of climate change?

Gary Nabhan: Absolutely. More than any other human activity that both contributes to and is negatively impacted by climate change, farming has tremendous capacity to both reduce its carbon footprint and adapt to changing conditions. Farmers can do so by using a wider range of crop and livestock diversity to buffer themselves from uncertainty, and by adapting and ramping up strategies for reducing the impacts of heat and drought that traditional desert food producers have employed for centuries, if not millennia.

Ben Watson: In writing this book, you’ve drawn upon the traditional knowledge of native and immigrant farmers from around the world — people who have learned how to deal with climate uncertainty. How did you find them? 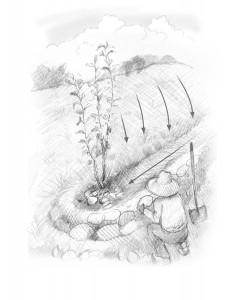 Gary Nabhan: Since 1978 or so, I have been fortunate enough to occasionally travel on work to nearly every other desert in the world, where I tried to pay keen attention to what indigenous and immigrant farmers were doing to deal with drought, heat, salinization and scarcity of fresh water for irrigation.  When I saw what looked to be an oasis-like mirage in the desert, I sought it out and found remarkably resilient, intelligent farmers there.  Thirty-five years later, I’m humbled by how much they have tried to teach me that perhaps all of us now need to know.

Ben Watson: Is this book primarily for farmers or gardeners? In other words, at what scale are these strategies applicable?

Gary Nabhan: I’d hate to see these strategies relegated only to a backyard garden in some desert region.  I’d like to see farmers and gardeners everywhere—not just in historically arid regions—take stock of these remarkably diverse adaptations to climate uncertainty. They may need to scale them up and adapt them to their own peculiar conditions, but as far as I can see, there will be no silver bullet like a climate-friendly GMO that is going to save us. We need to diversify our strategies and scales for agricultural production if we are to regain some modicum of food security.

Ben Watson:  In your opinion, what is driving climate change more: on-farm carbon “foodprints” or the carbon foodprint of our global supply and distribution system?

Gary Nabhan: The latter—on-farming fossil fuel accounts for less than one-fifth of all energy expenditure in our entire food system, but it’s an expenditure of energy that we can dramatically reduce through creative solutions that will improve rather than harm farmer’s bottom line. And consumers at large should help farmers transition to more energy- and water-efficient practices, as well as dealing with similar problems in the ways they store, process and consume food at home.

Ben Watson: Do you have cause for either hope or despair as we pass beyond the carbon level of 400 parts per million in Earth’s atmosphere?

Gary Nabhan: As the saying goes, I’m an intellectual pessimist but a glandular optimist. Every time I get my hands dirty outside and try to solve the problems in my own orchard and garden, I find hope lurking in the emerging greenery. If we simply sit on our butts all day in an office and wring our hands, not much will get done. So read my book quickly, then compost it, and with what you’ve learned, plant something fresh in it!

Over the past century, we’ve transformed the arid lands of the American west into year-round, well-irrigated agricultural powerhouses. Today, fruits,…

Thousands of scientists expressed alarm this week at the expansion of the wall on the U.S.-Mexico border. A report in BioScience outlined…