While some media reports assume that efforts to protect biodiversity in our landscapes inevitably cost jobs in our communities, heritage orchards and cideries prove otherwise. Since the economic downturn, study after study show that new food and beverage microenterprises have become one of the most effective means of jumpstarting local economies hurt since the 2009 downturn. They not only create jobs for local residents rather that outsourcing the work to distant places, but they purchase goods and materials from other local businesses and make alliances with independent-owned restaurants and lodges which feature their beverages.

At the same time, there is growing evidence that the revival of heritage orchards and cideries are playing a critical role in maintaining the food diversity and food security of our country. A century ago, American families grew over 200 million apple trees of roughly 16,000 named varieties. In addition to eating some apples fresh off the tree, Americans grew other varieties known as “good keepers” and “winter apples” that could be stored through the winter and into the spring when supplies of fresh, nutritious produce were otherwise low. While some were only eaten as snacks and as desserts, other varieties were particularly suited for making sauces, butters, jellies, pies, sweet and hard ciders.

Each distinctive apples hads its own calling, and its own place in the landscape. Appalachia had the greatest diversity of apple varieties of any region in the Americas, from Alaska to Tierra del Fuego. And each community took pride in its contribution to this diversity, naming its best selections after people or places close to its heart. Virginia was not only the epicenter of apple diversity, but of apple culture.

Today, in a mo 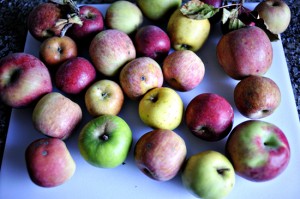 re homogenized world, most grocery chains carry only 11 varieties of apples throughout the year. Sadly, many American schoolchildren grow up thinking that a Red Delicious or a Jonathan is all an apple can be. Only 3000 varieties are still available from our nurseries, but over the last quarter century, we have lost more 600 independently-owned nurseries that offered their customers detailed information about which varieties did best in their areas. Today, a third of American gardeners purchase all of their plants in the lawn-and-garden departments of Walmarts, Home Depots and the like, where few varieties and even less local knowledge is accessible.  These trends not only disrupt our cultural heritage, but they have created what one independent businessman calls “an economic holocaust” that has lessened our food security and nutritional options, while damaging our local economies.

Fortunately, there is a countertrend afoot across much of America. National treasures such as Tom Burford and locally-owned businesses such as Vintage Virginia Apples, Abermarle CiderWorks and Foggy Ridge Cider are exemplars of this re-diversification of our options for eating and drinking apple products. These independently-owned businesses not only provide us with great tasting, pleasurable, nutritious products and memorable experiences, but they offer something even larger: hope. Talented entrepreneurs such as Diane Flynt, Charlotte and Chuck Shelton offer all of us inspiration, for they are maintaining an American tradition of ground-up innovation that is literally saving our horticultural and culinary heritage.

This fall, vote for their vision of America with your pocketbooks, pies and mugs. They are saving an American legacy that you can taste, and they are creating jobs in our rural communities as they do it.

Gary Paul Nabhan is Virginia Cider Week’s Scholar in Residence, and an orchard-keeper of more than 70 fruit and nut varieties in southern Arizona. Honored by Utne Reader this last year as one of twenty visionaries making the world a better place in which to live, his twenty-five award-winning book titles and his many articles can be found on line at www.garynabhan.com.