Did you know that Tucson and its Pima County suburbs have 12 times the number of mobile food services per capita than New York City?  The county reports some 941 mobile food businesses registered for business, including 235 full service food carts, 45 “dogero” push carts,  and 85 other mobile vendors in Tucson alone. Pima County appears to have tied with Los Angeles County in California for having the highest ratio of mobile street food businesses to people of any areas in the United States, with roughly one vehicle offering food on the fly for every 1,000 residents.

For as far back as anyone can remember, Tucson lunch wagons have supplied factory and office workers with a variety of cheap, but freshly-made fare.  But when the Sonoran hot dog craze spread from Hermosillo to Tucson nearly 20 years ago, the number of push carts and mobile food stands rose sharply. Street food is highly prized in Mexico, among both blue collar and white collar workers. As Mexican immigrants to Arizona gained the resources to start their own micro-enterprises, food wagons and push carts were among their first, capitalized ventures.

Today, it may cost as much as $50,000 to build and equip a full-service food truck to county standards, and an additional $500 to 1000 to secure permits.  But the payoff may still be worth the effort. In the case of Daniel Contreras, known in Tucson as El Guero Canelo, his Sonoran hot dog carts expanded into three restaurants. Coverage in the New York Times, on National Public Radio and song named for him by a Tucson-based band called Calexico, have made him into a legend across the border region and nation.

But it would be wrong to assume that Tucson’s mobile food wagons are exclusively hot dog carts and taco trucks. Other ethnicities and immigrants have added diversity to the street scene in Tucson and in Phoenix as well. Within Arizona’s two 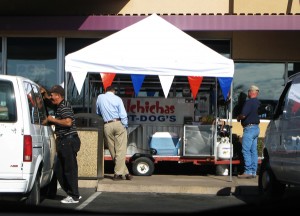 As Cathalena Burch wrote of the recent evolution of food wagons in the Old Pueblo, such trucks “are changing the landscape of Tucson’s street food from the ubiquitous taqueria and Sonoran hot dog to more eclectic fare: gourmet burgers, cheesesteak (?) sandwiches, savory- and sweet-stuffed crepes, organic ice cream, and deconstructed desserts, from fruit pies presented like French fries and strawberry shortcake served as a slider.”

While Tucson may have far more of these mobile micro-enterprises than the Valley of the Sun, the names of Phoenix food wagons read like poetry: Jaime’s Bitchen Kitchen; Jamburritos Cajun; Luncha Libre; Paradise Melts; Puro Sabor; Sunshine and Spice; Torched Goodness, and Udder Delights. In addition, the Phoenix Street Food Coalition has recruited 29 member-operators, and regularly holds rendezvous with music and other entertainment in the parking lot of the downtown farmers’ market within blocks of the state capital.  The Coalition has also encouraged its vendors to source their ingredients locally, and many pick up their ingredients from the Phoenix Public Maarket. Other food wagon vendors in Phoenix and Tucson are now sourcing some of their fresh produce from Market on the Move, a project of the 3000 Club that obtains discounted tomatoes, peppers, onions and other vegetables from transborder brokers in Nogales.

Of course, not everyone is gratified by the growing presence of food wagons in Arizona’s Metro areas.  It is obvious that Taco Bell and other Mexican food drive-ins can hardly beat street food vendors in terms of freshness, price or variety. What aficionado would choose a commoditized (?) hard-shell taco over soft, warm tortilla and its fixings made the same day by the seasoned hands of local women?

In Nogales, Arizona, some 35 registered Mexican food stands are established along roadsides and parking lots, and another 30 impromptu stands occasionally appear over a year’s time.  Nogales city officials and land owners have triggered controversy locally by demanding that these vendors keep moving and regularly renew their permits.  What’s more, Nogales restaurant owners who allow street vendors to use their county-approved kitchens on consignment for early morning and late-night food preparations, have maxed out their capacity. In light of this reality, Nils Urman of the non-profit Nogales Community Economic Development is proposing to use government grants to develop a community kitchen and walk-in coolers that can be rented by street food vendors. Until this effort bears fruit, low-income residents in Nogales may have less access to affordable fresh foods than theyrequire.

Despite all the dynamism in the mobile food world of Sonoran Desert cities, a few things remain certain: Low-income residents are eating a diversity of inexpensive and flavorful meals from food wagons these days. Collectively, the menus cover hundreds of items and use dozens of fresh, locally-produced ingredients. The wagons and carts employ thousands of Arizonans who might otherwise be without work during these difficult times.  They feed hundreds of thousands of desert dwellers, who return home satiated and nourished for less than the price of a Happy Meal.