The Further Adventures of Hadji Ali

Last spring I was invited to join forces with a Turkish documentary TV and film maker named Ardan Zenturk in a retrospective on Hadji Ali, the first Arab of the Islamic faith to become a naturalized citizen on the invitation of the U.S. government. I had already written about his time in Arizona in the Journal of Arizona History and in my book Arab-American, which won the Southwest Book Award; the chapter on Hadji Ali was posted on the internet as a finalist in the OneBookAZ competition in 2009. However, I had no idea of his notoriety in Turkey, or recognition anywhere in the Middle East until Ardan contacted me. And now, with Ardan’s support, I am learning about Hadji Ali aka Phillipou Teodora in his birthplace….

Phillipou and his cousin Mimico first surfaced in historic documents when they were recruited by a man named Heap at the Old Caravan Bridge in Smyrna Turkey around 1854. While Smyrna has changed its name to Izmir and has become Turkey’s third largest city, down by its harbor there are still some 20 caravanserai where spice traders once came in from Africa, from Greece, and most importantly from the Silk Road. Nearly all boys growing up in Smyrna during the era of the Teodora cousins would have gravitated to see and perhaps unload the camels at the Kemeralti Bazzaar and the adjacent Kizlagarsi Han, a historic caravanserai that still stands. The Smyrna harbor was the overland terminus of the Silk Road, and jumping off-point by ship to Athens, Alexandria and Algiers, which at that time was a protectorate of the Ottoman Empire. 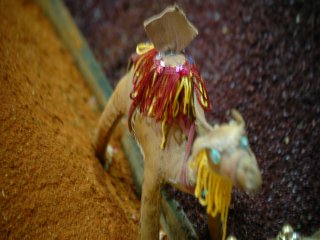 Perhaps even more probable was that Phillipou and Mimico learned how to manage camels while watching and helping with high-stakes camel wrestling matches. These wrestling matches between two male camels still occur every January and February in the villages surrounding Izmir. They serve grilled sujuk camel sausage at these events and drink lots of anise-flavored raki.

It appears that the boys learned enough about camels at a young age that they were recruited to work with the French Foreign Legion in Algiers in supplying French and Ottoman troops there. Phillipou converted to Islam around then, made a had to Mecca, changed his name, then returned to Izmir. An American named Heap recruited the cousins and several camels from Izmir to travel to Texas to begin the U.S. Camel Corps, the first of its kind to cross the Great American Desert from Texas to California. Hadji Ali continued to work with camels the rest of his life in Arizona, and spent several years near where I now live in Patagonia, Arizona, the only Western town that has its own Camel Parts shop. No kidding….

Stay tuned for Ardan’s documentary next year, which may include Doug Baum and I guiding a camel ride in the Las Cruces area for several days… And next time you come visit, ask me to show to how to spice up some sujuk camel sausage made from the losers in the wrestling match…