The Bazaar World of Spice Trade – A Report from Asia Minor

I feel a familiarity, even a universality, whenever I enter a spice market in any part of the world: an Arabian souq, a Mexican mercado, a Turkish carsisi.  It is not just my familiarity with the spices themselves that makes me feel this way. Many of them have traveled thousands of miles across land by camel, or water by dhow, to reach marketplaces in all for corners of earthly universe. This is the ancient form of the global economy, and to me, one much more benign than we see today, for it is based on moving small quantities of precious goods long distances to surprise our senses, instead of moving large television and ghetto-blasters around to dull them.

I also sense a familiarity whenever I deal with spice traders. These traders use universal means to seduce you into their stalls, to entice you into smelling then sampling a few of their powdered herbs and seeds, and to cajole you into purchasing more of their powders than you could ever actually use over a dozen lifetimes!

Spice merchants are the quintessential cross-cultural traders, for they build an attractive sale pitch from what they know of where the spices have emanated, and use that to connect with where you are from and what satisfactions you wish to gain by taking home their product. 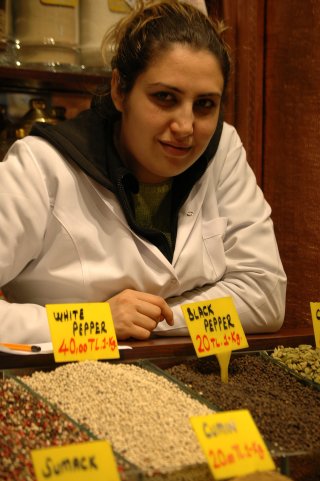 In most cases, customers come not merely to purchase a one of many rather common culinary ingredients for later use, but they come to taste the exotic. After all, our rices, pastas, couscouses and masas would be rather monotonous if they were only made of staple cereals, and were never spiced up by cumins, corianders, chiles, gingers and saffrons. Our lives, too, would be monotonous were it not for contact with other cultures and their distinctive ways of seeing the world. If many Americans have become too parochial, provincial, paternalistic and even narcissistic, the bantering and bargaining over minute quantities of high-prized spices with someone from another culture is an effective way to bring us out of our shells.

Oddly, however, a spice vendor is hardly ever a stereotypic representative of just one culture. Take Bilo, for instance, whom I encountered in the “Egyptian” spice market in Istanbul recently. He was not Egyptian, but a very cosmopolitan Turk who had grown up in Germany and learned English from the Brits.

He could readily tell me how to balance a spice mixture in different ways to best suit sis-kepaps, kofta, fish or sausage, but would never really let me see the quantities of the various spices that he blended into to each baharat. That secret, in addition to his capacity for lively engagement with his customers, is what keeps him in business. The exotic must remain elusive, or we will never regularly engage in seeking it out.

The same is true for those who blend spices in zaatar mixes in Lebanon, into berbere in Ethiopia, and into ras al hanout in Egypt or Morocco. They are part alchemist, part cross-cultural therapist. Spices are the arrows that are shot to capture another part of the wider, richer world around us. But the goal of buying spices is not to possess the arrow itself, but to be launched toward where it is pointing.

Gary Nabhan, eco-gastronaut, has been wandering around Istanbul and Izmir, Turkey and Moscow and St. Petersburg, Russia this winter trying to imagine what virtuous trade might mean in a world homogenized by mind-dulling globalization. He found his answer for one brief moment as a pinch of Urfa chile powder laned on his tongue.

Thousands of scientists expressed alarm this week at the expansion of the wall on the U.S.-Mexico border. A report in BioScience outlined…

Nabhan: Food and Farming Crisis Requires Both Science and Faith

Not since the mid-1980s has America faced a food and farm crisis of such epic proportions. In 2020, American farmers…