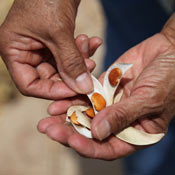 Listen to this Interview

CURWOOD: Those red hot chili peppers that appear next to entrees on many restaurant menus today can mean different things to different people. Some might consider them a hot, yet savory, challenge, while others see them as red flags – a warning to sensitive taste buds.

Whether you like your food spicy or not is a personal choice, but as Gary Nabhan contends, it’s also likely to be related to where your ancestors evolved and what they ate. For example, your genes might make you, what he calls, a “super-taster”–someone who can’t tolerate peppery foods.

He’s studied how the landscape might shape our dietary choices, and how our genetic makeup has adapted to these choices through time. Gary Nabhan joins me now to talk about his new book, “Why Some Like It Hot: Food, Genes and Cultural Diversity.”

CURWOOD: Now, I guess we can’t talk about evolutionary diets without addressing the very topic of your book: why some like it hot. And you open this section of your book about chili peppers and spicy foods with an anecdote from your own life and, in a way, it illustrates the dramatic taste preferences that people have. Could you tell us first about the time you dated a super-taster?

NABHAN: Yes. I did not know it at the time, but I was trying to make a romantic meal for a woman who had no tolerance to the piquancy of chili peppers. And I had just seen “Like Water for Chocolate” and there’s a wonderful recipe in there of stuffed chilis called “chiles enogadas”–it’s in a walnut and almond sauce but the chilis are quite hot. And so, what I thought would be a romantic meal that would have aphrodisiacal properties caused my date to flee to the kitchen after the first bite.

NABHAN: Her ears were burning, her face was red, she was coughing and trying to get down as much cold water as possible. And it was not her idea of an aphrodisiac.

NABHAN: The relationship somehow survived that, but let me say I became a lot more aware that everyone else does not have the tolerance for chilis that I do.

CURWOOD: Now, on the face of it you’d think that the extreme spiciness of chili peppers would be a turnoff. I mean, you’d say “Hey, Mother Nature is sending me a message: don’t eat this plant!” So, how come it’s in our diets?

NABHAN: Well, chilis have five different ways of reducing food spoilage, for example. They reduce microbial colonization of some of our foods. They can also provide us with this wonderful feeling of coolness because the food stimulates us to sweat. They can reduce the activity of parasites in our guts. So, it may be that chilis give us a little bit of pain but give our parasites a lot more pain. And some people have chosen to tolerate that certain amount of pain for the pleasure that it gives them and also for the health benefits.

CURWOOD: Now, this is completely unscientific, but it just seems from casual observation that the closer one is to the tropics, the more likely one is to find hot and spicy food. If that’s so, why?

NABHAN: Well, your anecdotal observation is born out by some very good research that shows that chili consumption is much higher in tropical climes and, in part, that’s because of this deterrence of food-spoiling microbes. Because of the heat and the humidity in the tropics we find a lot more use of chilis and other spices to control food spoilage. You don’t as often hear about Norwegian bachelor farmers having a lot of chilis in their diet; the cold is reducing food spoilage. So, I had a Norwegian bachelor farmer friend whose mother warned him when he went to University of Wisconsin not to have spicy food. And he said, “What do you mean spicy food? We’ve never had it. What kind of things are you talking about, Mother?” And she said, “Things like ketchup. We don’t want you to have any ketchup in your diet, it might upset your stomach.” So, there’s a huge gradient from the Arctic regions down to the tropics with more and more use of pungent spices, like chilis, in those areas that are prone to food spoilage.

CURWOOD: Now, E. O. Wilson, the biologist, is fond of saying that genes contain our deep history. And if I have it right, the basic thesis of your book is that genetically each of us is linked to certain types of food, that we evolved eating this food and we need to have it. In fact, you have a term, “evolutionary gastronomy,” that comes up a lot in your book. I guess that’s the scientific name here for what you’re talking about?

NABHAN: That’s right. The longer the chain of our ancestors who lived in one place–exposed to the same set of food choices, diseases, and environmental stresses in that place for centuries–then the greater the probability that there was genetic or evolutionary selection for a diet and for genes that worked well in that place. And what we see today is that so many people have been displaced that something that worked well in their metabolism for centuries–these gene/food interactions with particular foods that had a restrictive geographic distribution–the more that we have come out of contact with those foods, the more these interactions are expressed as genetic disorders rather than something that increases our fitness as human beings.

CURWOOD: You got into looking at food and the diabetes epidemic in Native Americans there in the southwest, where you are. And I’m wondering what relationship you’ve found between adult onset diabetes and Native Americans and traditional food patterns and the contemporary American dietary patterns?

NABHAN: Well, the remarkable thing, Steve, is that a half-century ago more Native American people in the desert southwest where I live died of accidental snake bite than they died of the consequences of diabetes. And now, it’s the reverse. In some communities where I’ve lived and worked over the last 30 years, more than half the adults now suffer from adult onset diabetes. And we used to just think it was the introduction of fast foods that are high in fats and sugars. And yet what we didn’t realize until recently is that the very foods that were in traditional desert diets, and had been for centuries if not millennia, were protective foods that chronically reduced blood sugar levels and improved insulin sensitivity and insulin activity. So that when those protective foods began to vanish from the diets of Native Americans in the southwest around World War II, the rate of diabetes skyrocketed. It went up 25-fold in three decades–an astonishing thing.

CURWOOD: What are the protective foods that Native Americans were eating, the foods that protected them from diabetes for so long?

NABHAN: Well, mesquite flour–ground mesquite beans–has been a major food in the southwest for over 8,000 years. A little drought-adapted bean that looks like a navy bean called the tepary bean is also very good at reducing blood sugar levels and increasing insulin activity. As is acorns of all kinds and a number of other wild greens and small seeds like the desert chia seed. And, fortunately, many of these foods are coming back into the marketplace.

CURWOOD: Now, your own ethnic background, as I understand it, is Lebanese.

CURWOOD: So, what is it about eating that food that makes you Lebanese?

NABHAN: Well, there are some wonderful gene-food culture interactions there. One of the most interesting to me is the connection with fava beans. The Middle East and northern Africa were an area where malaria was the number one killer of people for millennia, not just for centuries. And it ends up that there’s a very interesting interaction between the consumption of fava beans and a particular gene, called GP6D, that when people of Lebanese descent eat fava beans and are exposed to malaria, the probability of the malaria parasite fulfilling its life cycle and actually causing malaria fever is reduced. And that’s one of just several examples that the book goes through that discusses this interaction with our genes. Olive oil is another one.

CURWOOD: What does olive oil do in connection with your Middle Eastern genes?

NABHAN: It ends up that the Mediterranean diet studies that were first done in Crete showed that people consumed about twice as much fat as Americans did at the time of those studies, but it was almost all in the form of olive oil. And they didn’t have higher rates of heart disease even though they were consuming quite a bit of fat in the form of olive oil. And so people tried to extend the Mediterranean diet out to other cultures and, for example, people in northern France simply can’t consume that level of olive oil that is consumed in Crete or Lebanon or Syria where you’re really in the heartland of olive oil. So, even though there’s great benefits of the Mediterranean diet to some extent for everyone, if we really tried to consume as much olive oil as the people in Crete or Lebanon do, most Americans would fall short of even being able to absorb that much olive oil without metabolic effects.

CURWOOD: Yeah, how much?

CURWOOD: Where’s the epicenter of this Cretian cuisine? It’s this mountain village, right?

NABHAN: It’s a little town called Spili that was studied in the mountains of Crete from the 1940s on, and that the basis of most of our insights about the Mediterranean diet were derived from this little town of Spili.

CURWOOD: What were your impressions when you first got there of the people’s village and their diet?

NABHAN: The wonderful thing about Spili is that you see 80 and 90 year-olds walking everywhere, carrying wild greens on their back. Or they might be carrying a bucket full of snails that they’ve just harvested from a streamside. And my impression was that it was not just the foods themselves, but the exercise and even the traditional fasting that this community did, that made their longevity so remarkable that scientists around the world have come to see what insights they have.

CURWOOD: What do you do in the contemporary American family or household? You may have people from different kinds of ethnic backgrounds, different body types. How should those kitchens operate?

NABHAN: Well, I would say play to that diversity. Experiment with what most people feel good eating though trial and error, paying attention to the roots of the various people at the table rather than ignoring those–rather than thinking everyone at the table would do best on a Zen macrobiotic diet or on the Mediterranean diet. And it means making food part of our culture again, our collective culture of playing back those histories and learning about one another more rather than ignoring those differences.

CURWOOD: Gary Nabhan is author of “Why Some Like It Hot: Food, Genes and Cultural Diversity.” Gary, thanks for taking this time today.

NABHAN: Thank you, it’s been a pleasure.

Related link:
“Some Like It Hot” by Gary Paul Nabhan