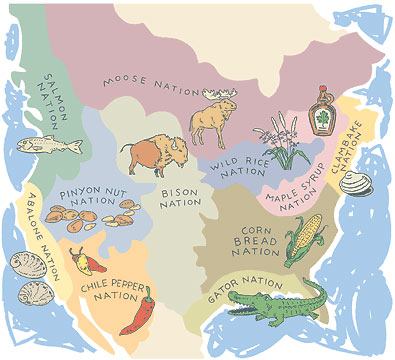 STRANGE DISHES ARE POPPING UP AT PICNICS, potlucks, and feasts all across North America. In the Pacific Northwest, you might sample pit-steamed blue camas bulbs; lunch in the Southeast might be accompanied by a glass of scuppernong wine; and a Southwestern meal might end with saguaro fruit syrup over mesquite bread. After years in the culinary wilderness, these and hundreds of other endemic foods are coming back to American kitchens, as we rediscover the greens, beans, grains, nuts, fruits, fish, and flesh found just beyond our back doors and nowhere else in the world.

Resurrecting native dishes is more than a foodie’s whim. The old mantra “You are what you eat” has taken a new turn: Today we know that what we eat also shapes our landscape, more so than any other human activity in history. A diet of corn-fed beef is a vote for a world dominated by genetically engineered grain, factory feedlots, and toxic, nitrate-laden streams. A switch to grass-fed buffalo, on the other hand, is support for unfenced, open pastures and the return of prairie grasses and herbs. Which world do we want.

If we’re only concerned about the environmental destruction of conventional agriculture, eating local and organic will do the trick. But it doesn’t address the rootlessness of our modern cuisine. You can now get organic mesclun greens, Early Girl tomatoes, and Sugar Baby sweet corn pretty much anywhere. That’s fine, but when I visit a farmers’ market, I always look for the strange, hidden treasures. “How long have these things been growing around here?” I quiz the farmers. “How do you harvest them?” And, most important of all, “How do you cook ’em?”Where I live, in Flagstaff, Arizona, the diversity of available foods has doubled in the past five years. Many of the new additions are common, nonendangered species of native plants that grow within a hundred miles of the city: Arizona grape leaves, prickly pear cactus fruit, sumac berries, mesquite-pod flour, and oregano-like bushmint. They aren’t going to replace rice or wheat as dietary mainstays, but a taste of Hopi blue corn or chiltepine chiles connects me to my patch of the Southwest in a way that arugula or basil never will.

It’s true that harvesting traditional local foods has a spotty history. Wild game birds haven’t been on the menu for more than half a century, and many fish have been pursued to near extinction. But fisheries can be well regulated and sustainable, and so too could harvests of other wild creatures and plants. In many cases, putting these foods on our plates may be the only way to preserve them. As Poppy Tucker, a food activist in New Orleans, once heard her elders say: “Honey, if you want to save it, then you gotta eat it.”

This isn’t a message conservationists are used to hearing, but it is one for which there is increasing scientific support. Ethnobotanist Kat Anderson has shown that Native Americans in California historically tended wild-food and fiber plants by pruning, burning, bulb division, and tilling, thereby increasing their abundance, yield, and survivability. In the absence of those practices, some traditional plants long used by Native Americans and early settlers are disappearing. Similarly, scientists studying historical shellfish populations along the Pacific Coast found that hand-digging helped propagate native clams. Once clam digging was restricted in certain estuaries and bays, the clam populations there plummeted.

Today, even where wild foods are abundant, an ever-smaller percentage of the local population knows how to identify them, let alone how to harvest them sustainably and prepare them. And when wild edibles aren’t known and respected, they can easily be lost to neglect or development. Overharvesting of such high-profile foods as abalone, ginseng, and ramps by unscrupulous collectors takes place, in part, because too few responsible gatherers are in the field keeping an eye on the common resources.

Dealing in exotic foods didn’t start with Dean & DeLuca: There’s always been plenty of interregional trading and raiding. Ooligan oil from candlefish smelt was traded hundreds of miles inland from the Pacific Coast, perhaps exchanged for pinyon nuts, elk jerky, or succulent roots. Mullet, sea salt, and clams from the Sea of Cortez were highly prized by the Mimbres people in the highlands of New Mexico, who in return could offer the coastal fishermen turquoise, turkeys, and tobacco.

In recent years, however, our craving for food items from distant regions has gotten completely out of hand, to the point that we undervalue–or ignore entirely–our own regional edible treasures. The sheer volume of food imported to the United States has doubled since 1994. Last year, for the first time in U.S. history, we imported more food from other countries than we ate from our own fields, streams, orchards, and bays.

During my half century on Earth, the global food system has changed more dramatically than during any single previous generation. Sixteen percent of the energy consumed in the United States is now used to grow, harvest, transport, process, and prepare our food. And items coming from farther afield are responsible for a growing percentage of food poisonings, like the contaminated scallions from Mexico that killed three people in 2003. Outsourcing our food production to distant lands also strips those countries of their own agro-biodiversity, making them more like everyplace else.

The alternative is to take an eco-regional approach to eating, which is the focus of a consortium I helped found called Renewing America’s Food Traditions. Rather than seeing North America as the familiar three republics, RAFT has carved the continent into “food nations” distinguished by their keystone foodstuffs. I live on the border between Chile Pepper Nation and Pinyon Nut Nation. The Pacific Northwest is, of course, Salmon Nation, while the Upper Midwest is Wild Rice Nation. Bison Nation’s eponymous ruminant not only provided sustenance for whole cultures, but its migratory grazing patterns and wallows also determined where wild foods such as prairie turnips and sunflowers proliferated. Today bison are making a modest comeback from near extinction, partly because eaters in Bison Nation and beyond have rediscovered the taste of grass-fed buffalo from the Intertribal Bison Cooperative, a group dedicated to returning the animal to Indian country. And in Chile Pepper Nation, the wild peppers called chiltepines grow alongside drought-tolerant “nurse plants”–mesquite trees, hackberry bushes, and Emory oaks, which produce their own edible products in abundance. These shady groves also attract quail, doves, desert cottontails, and pack rats, the edible guinea pigs of the southwestern desert.

To promote the tastes of these diverse food nations, RAFT has enlisted dozens of chefs associated with the Bon Appétit Management Company, who took up our challenge to develop recipes that feature regionally adapted heritage breeds and heirloom crops–traditional, open-pollinated varieties, some of which have been in cultivation for hundreds of years. Tens of thousands of museumgoers, students, and others who frequent Bon Appétit cafes and its affiliated food services will soon have a chance to savor these historic local flavors.

Other sponsors of our organization are engaged in propagating these foods. Seed Savers Exchange and Native Seeds/SEARCH collect and distribute tens of thousands of seed samples of heirloom fruits, vegetables, and herbs. More than 400 market farmers who custom-grow for the country’s leading chefs are working with these two nonprofits. And in the wake of Hurricane Katrina, Seed Savers donated 2,500 packets of heirloom seeds to Gulf Coast farmers who lost their own stocks during last year’s floods. The results are already appearing in the stalls of the Crescent City Farmers’ Market in New Orleans.

In Salmon Nation, RAFT brought together two dozen chefs, farmers, fishermen, Native American foragers, food historians, cheese makers, and orchardists to list local traditions at risk. They found some 170 foods unique to the region, a third of which are in danger of extinction or cultural abandonment. Their collected wisdom is recorded in a book, Renewing Salmon Nation’s Food Traditions, which lists the nurseries, seed companies, and hatcheries ready to repropagate the region. Since then, the Makah Indian community, working with the international food-culture preservationists at Slow Food, has set out to revive the Ozette potato, one of the few varieties that did not detour to Europe before taking root here. The Makah rescued these South American spuds from abandoned Spanish forts on the Pacific Coast and tended them for two centuries. The Ozette has an earthy, nutty taste and creamy texture and is now featured at intertribal celebrations.

How can you restore your own food nation? All it takes is an adventuresome attitude at your local farmers’ market, a scavenger-hunt approach to ingredient collection, and an openness to the tastes of your neck of the woods. Every bite you take will make you more a part of your home.

Agriculture has been a major part of the state’s economy for a very long time, but droughts and heat waves…

No one Can fill Big Jim Griffith’s shoes, for he—more than any other Tucsonan—triggered enormous and lasting community pride in…